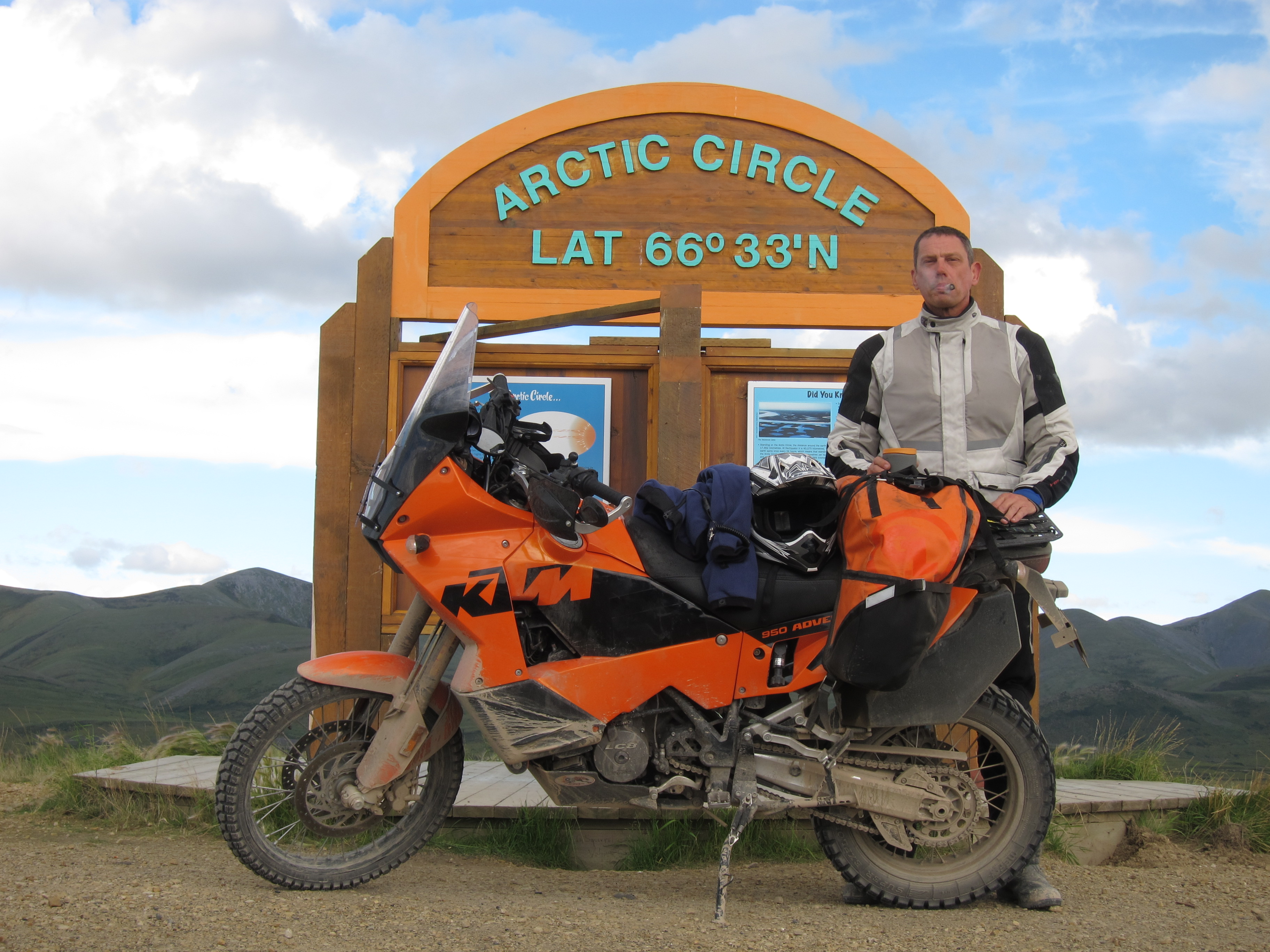 Why this ride ?
Why ride from Siberia to London ? Why ride on bad “roads” many of which are littered with sand, potholes, or even unmarked on any maps or GPS data ? Which mandate crossing on bridges constructed ONLY in the middle of rivers/streams ? Between stops of dodgy gas quality and limited culinary variation ? Where the most likely common tongue will be Russian, of which I know even minimal amounts of phrasebook-speak ? Where the elevations will range from sea-level to more than 15,000′ ? Where temperatures will hover between freezing (0 deg C) and greater than 100 F (45 deg C) ? Where emergency help may be several days or longer away ? Where parts not carried will be parts unavailable ? Where you have to be responsible for yourself ? Where everyday offers another one of largely unknown experience and outside of the sun’s cycle, little routine ? Where a schedule is largely impossible and resilience and reserve mandated ?

I don’t know how anyone could resist. And these opportunities will not exist much longer on terra firma. (Sailors have a good while, yet.) The earth is quite crowded and even Siberia is rapidly being transformed to support the appetite for raw materials from it’s southerly neighbor.

Outside of Siberia there are the old Silk Road cities of Samarkand, Bukhara and Khiva. The AMAZING Panj River Valley between Tajikistan and Afghanistan. The incredible ethnic populations of central Asia. The coast of Turkey, the museums in Ankara. The breathtaking expanse of Mongolia, ‘Land of the Endless Blue Sky’. And the ride across much of actually old (fashioned) Europe (Romania, Bulgaria, Albania, and the nations that used to comprise Yugoslavia) and the modern old Europe. Several decades of travel experience has informed me that the people will be a fantastic gift.

Nearly everywhere, the 800-year old fingerprints of Genghis Khan remain faded but indelible. Upon his death he created the Khanates for his 4 sons. An amazing manager and a student, maybe guru, of human behavior, he was unable to choose a single heir. So the empire was divided and in many ways, the modern world was created. An elaborate network of communication, paper money, and trade was developed. The Khanates practiced a form of socialism, with wealth shared amongst them, buffering any one regions’ bad year(s). A full-blown meritocracy blossomed permitting any faith and race to thrive. The Mongols were, in fact, an idea, not a race. If you offered loyalty and skills there was a secure, prosperous place for you in the realm of the Khanates. That said, while they were great assimilators of technology, practices and largely free of what we call racism, they contributed little if anything to what we call transcendent civilization – music, dance, literature, cuisine, architecture.

Unfortunately, the Khanates also offer the modern world a caution. They were connected by an elaborate system of shared currency, rapid communication, and trust. Bubonic Plague destroyed the trust and the rest followed. The modern world is very susceptible to interruptions in communication due to technology. And to a contagion or pandemic. We’re just a power outage away from losing contact with far flung regions and a mutation apart from pestilence.

Why on a motorcycle ?
A motorcycle has always represented freedom by various degrees. It’s a common experience as a motorcyclist to hear the same thing from many passersby – “A fine day for a motorcycle ride.” Whether it’s a perfect day in northern California or a cold, rainy day in the Yukon. Many years ago a riding buddy and I on a 13,500 mile (22,000km) trip encountered lots of road construction (the grapefruit-sized stones for 30 miles on street bikes stands out), cold rain (setting and breaking our tent in precipitation almost everyday for 70 days), and a particular Aussie hitchhiker strolling, so he said, toward Austria. We’d live on foil packs (my buddy was penniless, lose weight, and trade turns getting a warming fire going at camp) and invariably be regaled by this fellow telling us of one after another gourmet or at least highly indulgent meal. He wasn’t mean, too much. But he drew a stark contrast with our wet, damp, cold and eat for need circumstances.

Finally, we ran into him again after we’d set camp and made a “scouting run” of the road headed north to Inuvik, 125 miles (200km) above the Arctic Circle. At the communal cook space at Tombstone Valley campsite he began weaving another culinary yarn. This time it was steaks and . . . bubbly (? ! ?). Chuckling at his own story and joined by fellow campers (though Eric and I were the only tent every nite, and sometimes the only campers, period) he told of his ride with a local Inuit who drove the road with one-hand on the steering wheel and the other straight-armed against the dash to hold himself in his seat on the rough, slippery, curvaceous clay-bedded, calcium-chloride path that was the ‘Dempster Hwy’ while moving in excess of 100mph.

Apparently, the Inuit saw Eric and I and, so the corpulent Aussie told, “You see that. Motorcycles in the Yukon in late August. THAT’S an adventure.” Obviously, I’ve barely remembered that story or that trip.

A motorcycle IS an adventure. Some more than others. One needn’t be quite the traveling mechanic of 30+ years ago but basic mechanical competence is highly recommended. Motorcycles are poor places to take refuge from weather or large animals and wait for help. Exposure is what makes them a great conduit of experience and means one must acknowledge that while the view is better, one is a bit closer to the edge. You can’t escape the warm sun, the cool breezes, the gentle smells, the sounds and . . . in much of the world the sense of shared experience that many villagers you see will know and assist in introductions for directions, food, lodging or just share a smile. And . . . you can’t escape inclement weather, the choking diesel fumes and the occasional pursuing wolf-dog, forest Barbie (deer) and “curious” bear.

But that exposure to your environment, that trade of experience for the appearance of safety jettisoned, also means that the motorcyclist isn’t terribly threatening. (Acknowledgments and condolences to all the Canadians who asked my parents in the 70’s “if motorcycle gangs controlled many towns in the US”). The motorcyclist is far removed from the “air-conditioned Gypsies” who ply the ALCAN, Pan-America Hwy, and venture for a weekend into the backcountry with a large generator to fire their TVs and DVD players in search of “adventure”, passing humanity in a motorized aquarium. (Once in the Yukon we saw a HUGE Winnebago with TWO satellite dishes and . . . Eric had to restrain me from slashing the tires.) Ultimately, a motorcyclist will have not just fewer opportunities to avoid the public he travels past, but many more opportunities to interact and share with the locals.

Well, here are a few reasons why not:

The “Original Route” rev. 6e is available on the Blog pages as is my most recent tracked location. A map that allows for what the world now consider’s normal Google interactivity is also presented.

Lastly, some simple promises: a) this will not be a maintenance log . . . no telling you about what hardware is or is not available in the local version of Home Depot or Autozone. Not unless there’s a tremendous story or a real character involved. The first seems nearly implausible, the second possible. And there’ll be little of me in still, video or generally writing about . . . me. This is about the road, the people and surroundings, the history, the food. I’m just along for the ride and some documentation requirements.