Well . . . there’s that issue with the oil sender leaking.

So . . . after arriving I didn’t exactly RUSH to the bike because I knew that if things were bad . . . it was the end.

In spite of some solid input from Scuderia West (San Francisco), one of the better KTM dealers on planet earth, there was NOT sufficient threading beyond the purchase the OEM sender used to simply put a new 10×1 metric fine thread in and Loctite it in.

For absolute confirmation I asked Nicolai, Patrik’s excellent mechanic for a opinion. And opine he did, via a bit of translation – “No, the new bolt and Loctite will not hold. But if you tap the hole . . . you’ll get metal in the engine.”

The proverbial ‘rock and a hard place’ positioning. After showing the taps and driving tools that John Katics had built for me he like that option AFTER I showed him I could block the oil passage hole with a bit of old rag. Nicolai said, “you must make new hole. Good luck. We go to lunch (!)”

This really is a task better left to a skilled machinist and DEFINITELY rates as “don’t try this at home – (non) professional at work.” But there are no decent machine shops within 1000 miles and so . . . it’s defibrillation time – either I kill the patient outright or I don’t.

With considerable anxiety but committed (in)competence I bore into the old hole SLOWLY. In fact, it took six full goes for me to tap the new threading going slowly each time. Was the bore orthogonal to mating surface ? No. Was it close ? Gut genug. 🙂

This will hurt me worse than it hurts you . . . maybe.

The rag worked to keep the (soft) aluminum parts out of the engine. I applied some standard blue Loctite and let it sit for about 20 hours before starting it. That left time for other sundry tasks including mounting my new (Montana) GPS mount.

A bit of gas was still in the tank and with the enrichment lever JUST cracked she fired in a moment and settled into a steady idle. (Yippee !).

Now would the seal hold ? Yes. Was the new carburetion (jetting and air filter) working ? YES !

In fact, it’s like she added another cylinder in terms of power. The new air filter represents a ginormous increase of intake surface area and the new jets pass considerably more fuel. 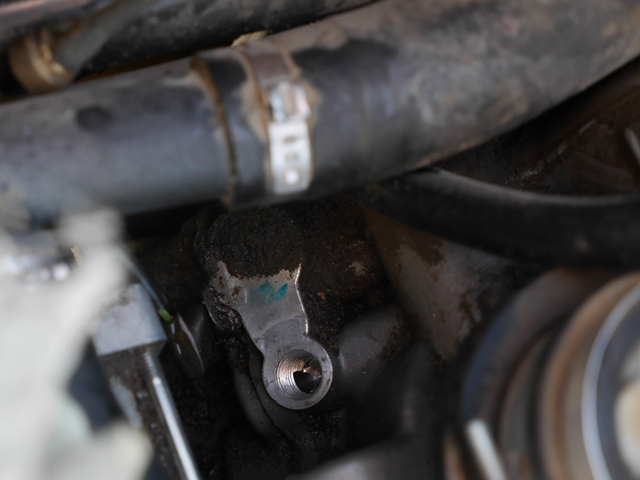 The sound from the intake wasn’t a roar but a ‘BRRAAAPPPP’ – it sounded more like a high-revving multi-valve, multi-cylinder car engine . . . and EASILY lofted the front wheel. This may be an old (10 years !) Duckling whose been nicked by riding remotely and suffered from some cooling abuse (Mongolian Gobi coolant, anyone . . .) but it’s still a KTM LC8 and sounds and runs fantastic. Nicolai’s face was palpably jealous of the exhaust note AND the intake aural attack.

Now after arriving on early AM on Saturday I prepared to ride to Bishkek to meet Tom Reiter on his BMW X-Challenge for a tour of the Kyrgyz Republic on Monday morning.

Leaving after 2PM I still managed to get to the hotel by just after 9PM.