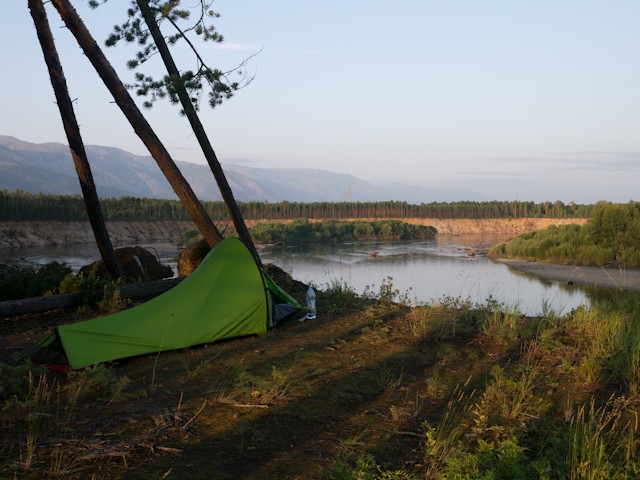 After a satisfying meal (German pasta that boiled up al dente in about 3 minutes) and a good fire we rested nicely with our view of the river below. BamBam provided his normal nightly entertainment. Hunched over his stove grinning and carrying on like a dwarf witch with little squeaks of glee. His typical flavor recipe was offered – everything in nearly equal measures, chili, powdered cheese, salt & pepper. The salt & pepper was genius (ask him !), as he’d mixed them together in the same container. Really. 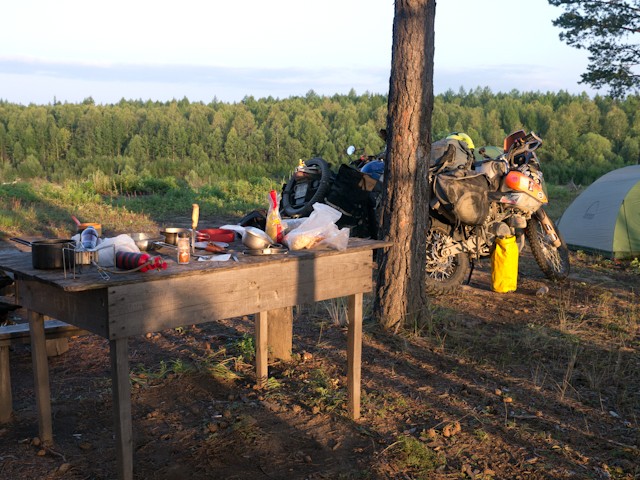 Where humble meals are prepared with glee and fanfare . . .

In the morning the mosquitoes woke a little later than normal but the nighttime breeze had vanished and allowed them to search for prey. Hair nets were the order of the AM and we probably looked like three guys in various stages of preparation for robbing a 7-11. Even if there were no 7-11s for several thousand miles. 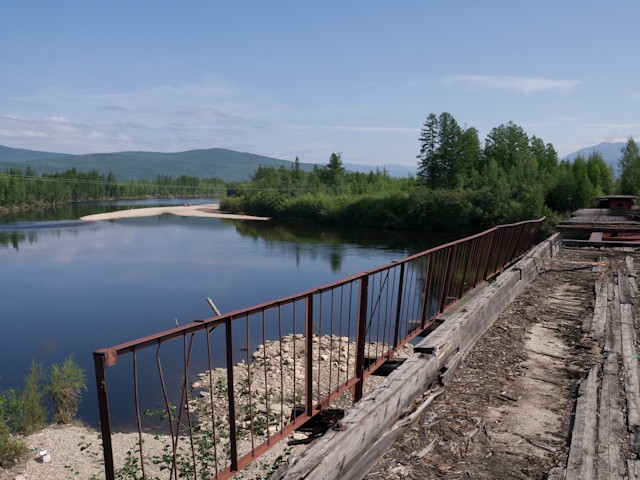 Evel Knievel fancied us wimps for not jumping it !

We knew that crossing the bridge at Kuanda would be non-trivial. The old bridge had been washed away long ago and the railway bridge was semi-guarded by un-armed folks. So another late start and then “hurry up and wait” as we figured a way across. Railway workers on the far side of the bridge broke for lunch and spoke with the signalman to let us pass. But he was unmoved. We called the number we’d been given in a semi-abandoned village and waited for the Kamaz to show up, roll our bikes on and be driven across.

The signal man was eager to share some tea and the relative comfort of his shack so we joined him inside out of the sun. The normal small talk about family, ages, etc began. BamBam had noticed his Garmin Montana was not behaving properly. It seemed the lithium battery might have failed. He thought aloud about disassembly which I recommended against – “It’s all SMT and if there’s a chip bad – you throw away the whole board. So if you only have a bad battery you’re risking killing the unit and/or compromising the waterproofness.” BamBam, of course, proceeded. He very quickly was to the mainboard and then, like a kid picking at a scab. broke off a piece from the main power connector. This sobered him to a degree and he put it back together. BamBam is not interested nor familiar with the Hippocratic Oath. 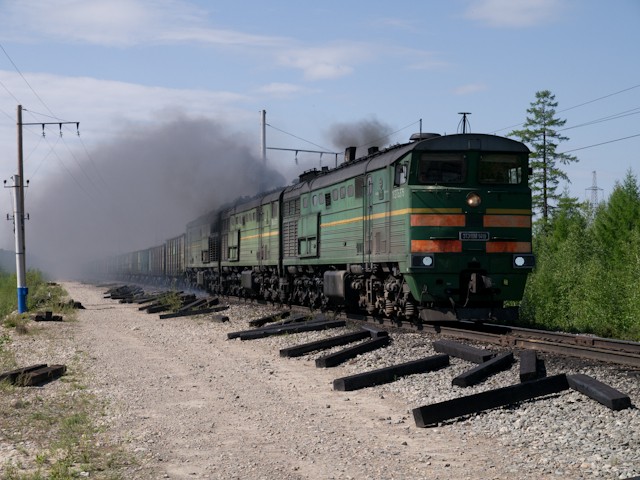 The wait to cross required several hours, all told. When the Kamaz finally appeared it was clearly VERY old and the driver and his son quite experienced. We loaded the bikes on while the driver’s son photographed and videoed us with his compact PhD camera. The ride across was short and fun and at the deepest the river was a smooth, swift current of about 5′. On the other side we met a Russian couple and their young son driving a well-equipped SUV. Mutual photography proceeded as well as a brief exchange of email addresses. 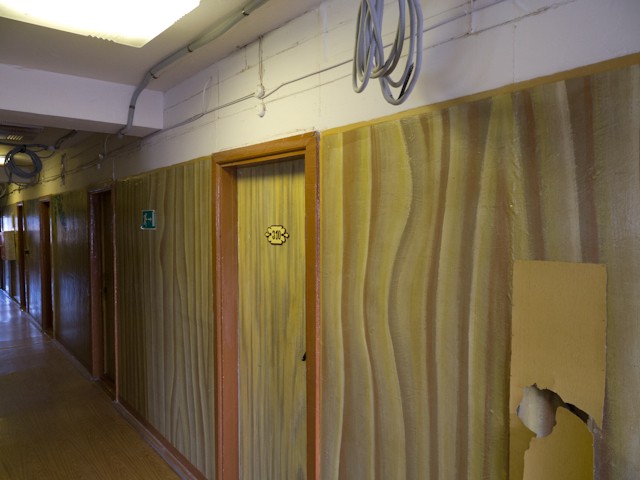 Finally underway in warm sun and clear skies the riding was very good. Limited large challenges and lots of rolling terrain at speed. It seemed we might actually make some progress. But we didn’t. Even though we bypassed the “Golden Spike” of the BAM by accident, stopped for a really nice lunch spot where we again saw no wildlife but DID see a Russian in a strange inflatable kayak battling the current furiously to cross to our side. 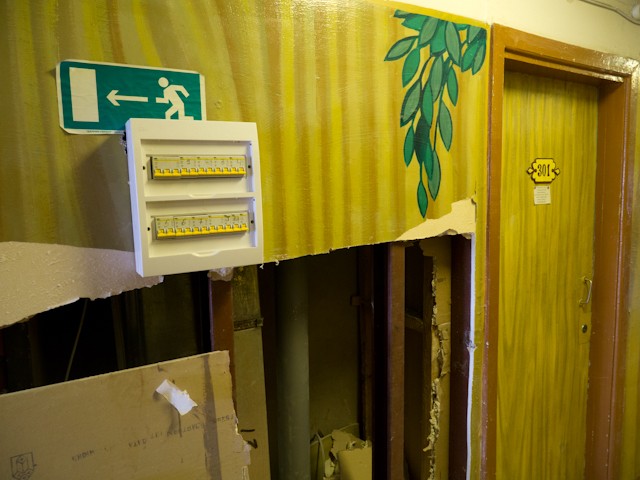 Which is superior – design or workmanship ?

The ride into Chara was near twilight, when twilight was well after 10PM permitting us to miss any chance of eating at a local cafe. The one hotel was a sight that made eyes sore. An ulcerous, rotten, cartoonish building with staff that were long on bureaucratic requirements as they were short on offering refuge. We nearly had to argue that we wanted to stay in the hotel. She seemed incredulous and started inventing all sorts of requirements – passport copies, etc knowing full well that none of this was possible at that hour, if ever, in Chara. Kim looked nearly despondent. I thought she was hilarious – memories of being behind the Iron Curtain came flooding back – interesting, YES, welcoming, not in this lifetime.

Finally, an attractive young woman, who apparently owned the place, interceded and made things right. This permitted us to stay in a room with no hot water, no shower, no toilet on the entire floor (!) and a design motif that could only be described as “alien to earth”. 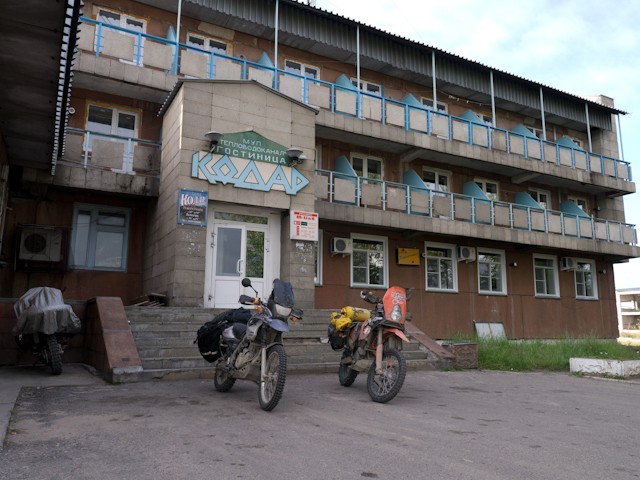 As we unpacked the bikes a group of about ten very, VERY drunk men staggered about. They seemed to be a mixed socio economic blend but the BAC was well above any legal limit on earth in each. Repeated introductions from the same fellow would proceed similarly, “Hello !!! I’m am Sergey.” Again, and again and again. Kim and BamBam looked terrified for the bikes. I don’t like drunks and crowds of drunks even less but these guys were much more likely to hurt themselves. Barely removed from “blind” drunk I voted to leave the Duckling in front of the hotel. Kim and BamBam took their bikes to a refuge in a garage. 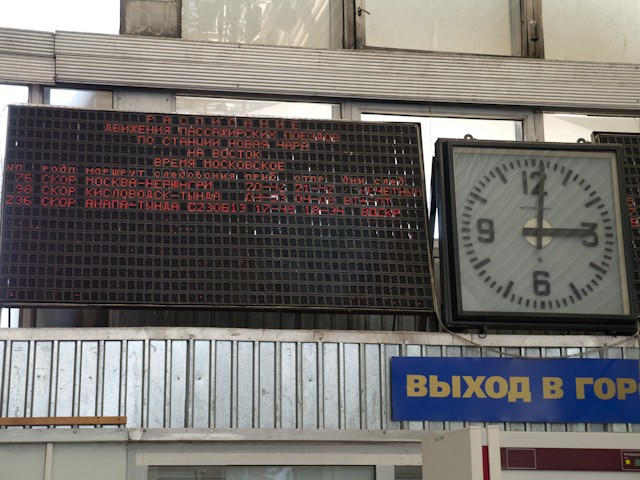 Not bad for ONE line track

We ate the remains of some canned fish and bread. Going to bed, again, late, tired, and very hungry. 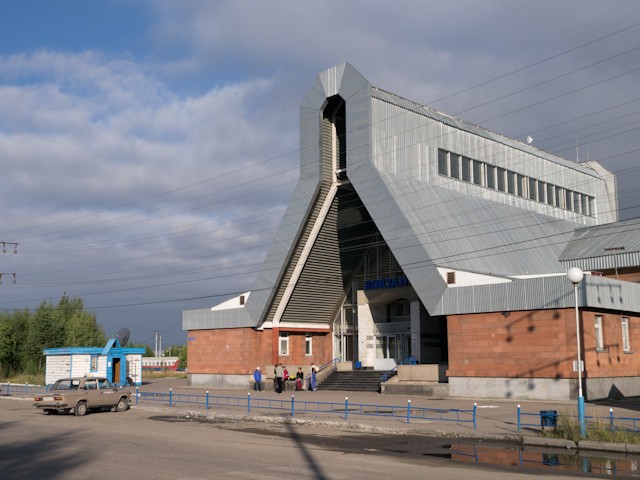 In the morning Kim and BamBam tried to update their emails/blogs/social media. I went for a walk to investigate the train station, museum and town as a whole. The train station was a corrugated steel monument to Soviet “inspiration” decorated inside with socialist wood murals that displayed the great ethnic diversity of it’s “brotherhood”. It was huge and a little like some Frank Lloyd Wright architecture – mostly empty (wasted ?) space. 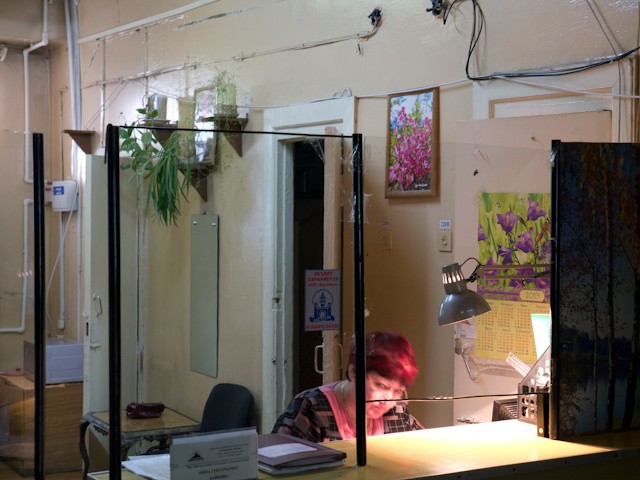 Her initial greeting ? “What you want to STAY here ?”

There was an ATM in the train station and a small crowd of rather anxious travelers. All of the cars in Chara clearly were like the motorbikes in Severobayalsk. Delivered on the train and trapped in the aquarium of the village’s tarmac, never to venture very far from town on the BAM road. 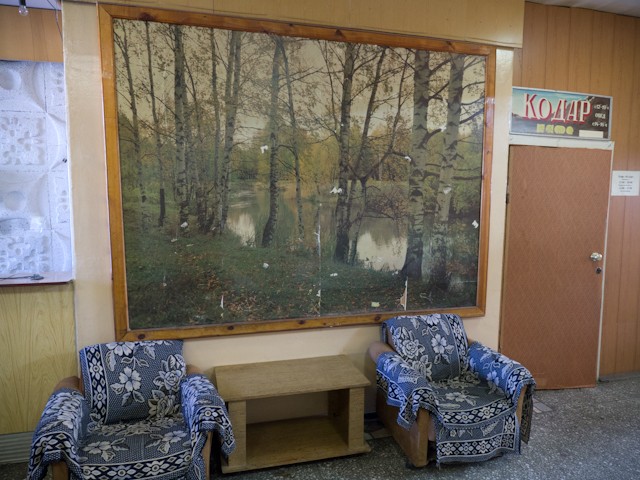 Our final gift was entering the hotel’s restaurant. We were quite early for lunch – breakfast was not served. The staff would not even acknowledge our presence. We proceeded out of town for the gas station where Kim ran dry and BamBam returned to supplement from his 690 tanker. At the fuel station BamBam started to suggest that he was owed something and would start charging Kim for petrol. “I’ll sell it to you for 1/2 of what he charges”. This stifled BamBam but his obliviousness was un-bowed.