By Taksimo we’d enjoyed the regular cycle of old wooden bridges, lots of water crossings, a few railway bridge crossings, mud, sand, embedded sharp edged rocks and potholed gravel. From the perspective of a washing machine cycle it seemed more like: always cold water, often muddy, sometimes clear, gentle to nearly violent agitation, endless spin cycles, and virtually no warm drying, particularly the boots and the feet inside them. Scenery was muted, aside from the fascinating rot of manmade structures, wildlife aside from a few birds and some very small fish . . . unobserved. 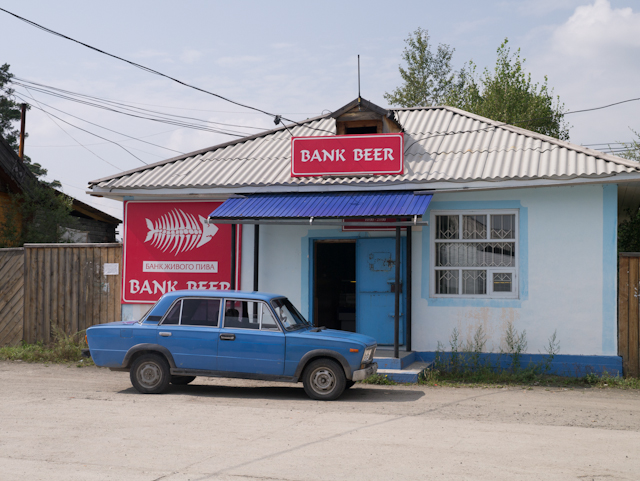 Where all too many Russian men spend their bank . . .

I hate cold water. Always have. BamBam was seemingly untroubled by it and have no doubt that both Kim and I very much appreciated his sorties into the cold, often fast moving Siberian “ponds” that continually interrupted our path. Actually, sometimes it seemed that it would have been better to have a boat that could also cross the odd terra firma patch. 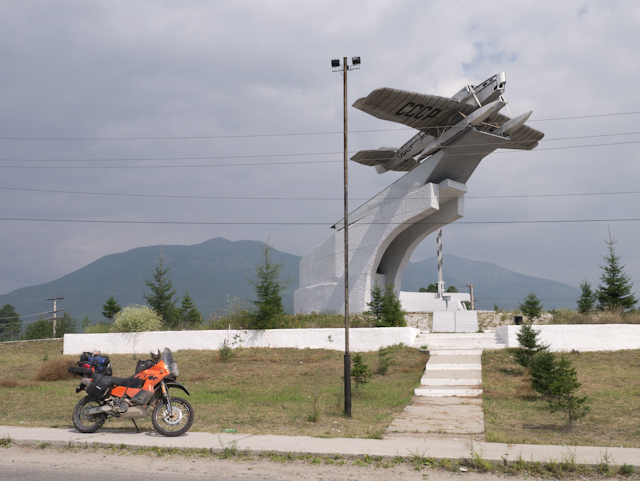 Late in the day we arrived at Taksimo with anticipation of a dry bed, warm shower and perhaps something a bit interesting to eat. We set about finding a room, eagerly. Unfortunately . . . Taksimo was apparently full ! ? ! Low on fuel, blood sugar falling in sync with ambient air temperature . . . we finally located a place with local assistance. Next door was a cafe hosting some sort of party which certainly peaked BamBam’s interest. By the time we’d finally gotten into our room, with windows but only one that would partially open, both the party and the cafe had closed. So . . . back to camp food – tinned meat, bread, some tea and one beer BamBam had wisely procured. 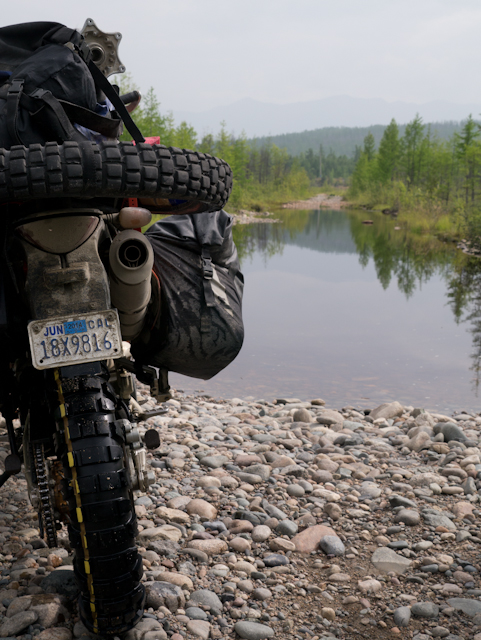 The length of the previous day’s long run into Taksimo had certainly taken it’s toll. Going to bed VERY hungry compounded the sense of foggy-fatigue. The smell of our gear, particularly our boots was . . . overpowering. Surely, we were encroaching on Geneva Convention territory regarding WMD and ethically at risk for suicidal behavior. Think of an OLD high school locker room with decades of sweat and dirt etched into every pore of the floor, walls, ceiling. Splash some “fresh” sweat on that and then permit just enough air circulation to stimulate the rot bacteria. L’Air du ‘oh’. It was so foul . . . it was a stunning relief to go out of the room into air that had rightfully resembled the atmosphere of an aging, poorly maintained, Siberian roadhouse when we came IN ! 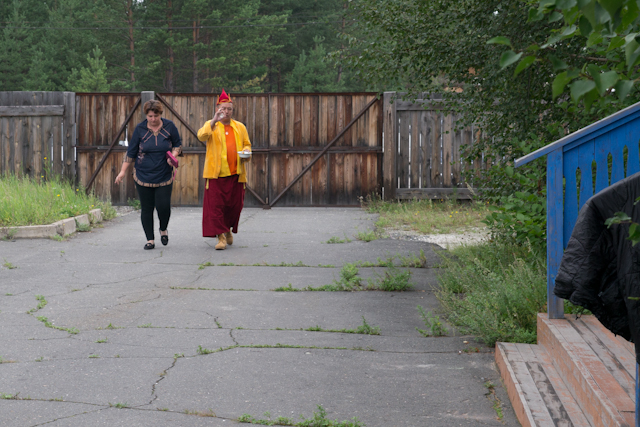 At our first place, which we thought couldn’t be worse . . . hah (!), there was a Buddhist Lama providing some sort of ordination services for over two dozen white Russians. And it would get worse ! We couldn’t stay in our current place. We moved to the second place that had been full the previous nite. They had a room that had to violate several safety codes in most countries. For one, no windows. Enter pure gallows humor. As our gear became less wet . . . it was like meat roasting – the nearer it came to “done” the more powerful the gassing. We straddled a line, even in Siberia, where leaving our room’s door open to assist in the airing risked fumigation of the hotel’s other guests, who thankfully, were Siberian ! A master fisherman shows his prey who is boss . . .

Our bunker, er room, in the second hotel provided opportunities for meeting other travelers who were largely workers on the railway or in the natural resources industry. Generally speaking the interactions were very friendly, even warm. But one conversation was notable for something else. The Duckling was dropped into that modest puddle in the background necessitating the removal of the exhaust mid-pipe and annoying BamBam.

A young Russian was eager to speak with Kim regarding the trip. How long ? How was it paid for ? What did your family think ? What “are” you ? (Kim has a Vietnamese father and French mother and speaks, at least, French, German, English and Russian.) At one point, the young man even suggested going along WITH Kim. (Kim just wanted to go to sleep in our Siberian version of the Black Hole of Calcutta.) 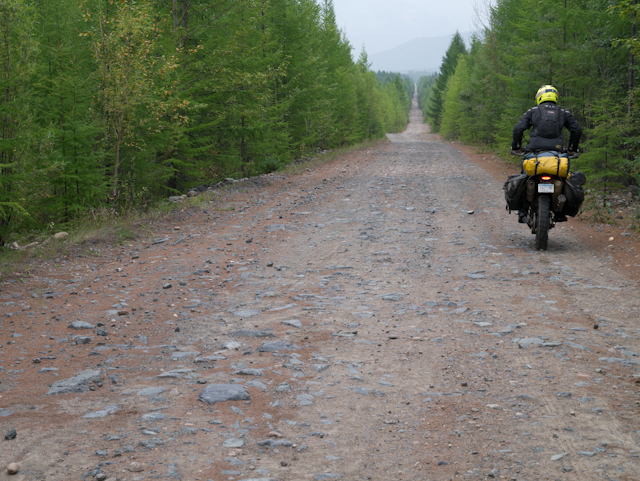 So when I came in he eventually turned to me and with his limited English and Kim’s russian translation started to ask me questions but not about travel. “Oh, American. Obama. Chornee. Nigger.” ‘Chornee’ (черный) is the Russian word for dark. Dark bread, dark beer – dark. But it would be the first, not last time we’d here Obama referred to as both ‘chornee’ and ‘nigger’. 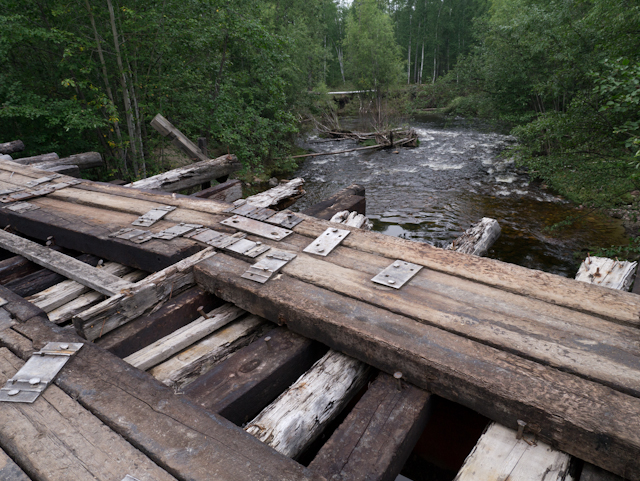 He wanted to know how we could deny our decline with a ‘chornee’ president. I first asked about the revolving door of Putin and Medvedev to which he laughed. And then returned to US decline as “proved” by Obama. My explanation that I didn’t care about the skin color of the President nor his religion but was interested in his character was wholly unsatisfactory. He looked at me incredulously as Kim translated. For the next 18 hours, whenever we’d meet in the hallways or outside . . . he averted his eyes from me. “This one looks excellent.”

The ride out to the Vitim Bridge, about 70km, was done with anticipation and a bit of anxiety given reports. Weather was excellent, sunny, dry and warm. Puddles appeared, some in places where the road punctuated endless saturated swamp (balota) briefly. Now the intervals between broken or rotted bridges decreased. 70km isn’t very far, but it wasn’t going to happen in under an hour. Not exactly the Taj Mahal . . . craftmanship only a grandmother could love.

At one bridge crossing we met two Russian men in a Sabaru Forrester that had Chevrolet badges. They told us, in Russian, that a German had ridden off the bridge two weeks previously and perished. We presumed they were talking about ‘Joe Dakar’ who’d we met in Ulaan Bator. At the second bridge crossing Kim had come VERY close to riding off one of the ties and this additional information did not assist his confidence. So, off to the bridge ! Oh look, a transition jump from horizontal to vertical ties. What a carnival l

I’d previously joked that no one would care nor remember who rode the bridge the fastest (Iker, the Basque MX rider had the current record @ 37s) BUT the rider who would be remembered would be the first one to ride off . . . so, if you go off – go BIG ! This was no longer useful nor appropriate. 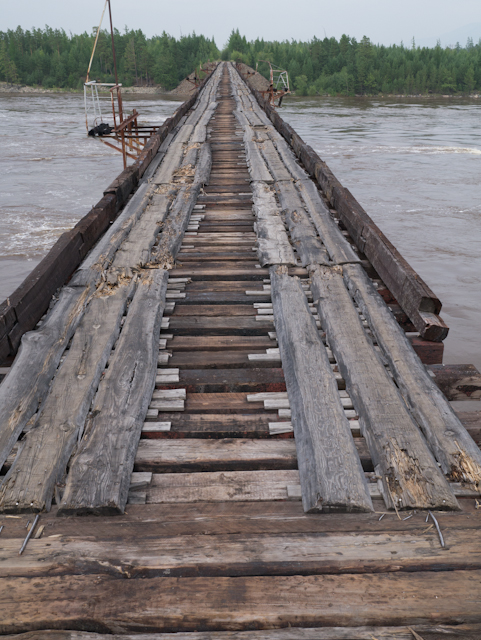 Those gaps are larger than they appear but were actually “fast”.

Less than 2km from the bridge we needed to cross a pretty modest puddle. Of course, this was probably the several dozenth puddle/water crossing/rotten bridge in the day’s ride and it was both close to the bridge and surrounded by inundated swamp. It also, it turned out, was very near a BAM railway maintenance station. If we’d had noticed that the repair depot had it’s rest area chair oriented exactly toward the “puddle” we all might have taken a bit more care. 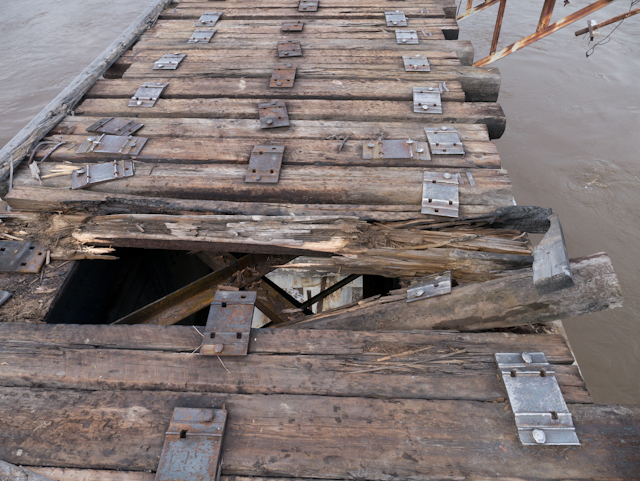 I rode in and quickly lost the front end as the bike turned to the upside of the puddle and then . . . timber, fell over. My thumb on the kill switch made ensured no water would enter the engine and do damage. The bike would not start and it was clear there was water in the exhaust. We tried lifting the bike up on it’s rear wheel to clear the water to no avail. We’d ridden along way to repair a bridge almost no one uses. Men !

So, close to the bridge with clouds gathering and the mood souring given news (rumors) of dead Germans I set about removing the exhaust to facilitate water expulsion. BamBam decided to try some fishing as we also noticed that the BAM railway workers were fishing in the swamp. A Russian on an ancient Ural with sidecar and his woman (you do NOT see alot of women in the Siberian outback – less even than in Alaska) came by and realized he couldn’t make the puddle that had taken me. His woman got out of the side car and sat behind him and he turned the Ural leaning over heavily to lift the sidecar into the air so that he could turn the bike around in a one vehicle track. 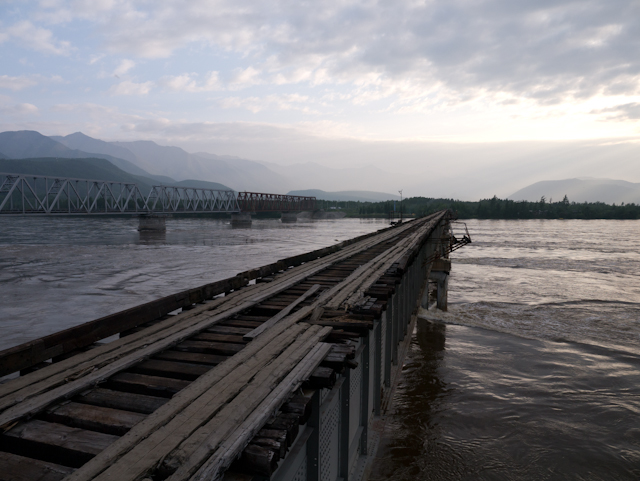 This is the angle to view it most appreciatively – the “I’m finished side”.

Yours truly acknowledged his superior skills and grace on an poorly implemented, ancient copy, of a German motorbike and sidecar. The hapless pilot of the Duckling.

BamBam, of course, consistently oblivious to his own CONSIDERABLE schedule intrusions complained “if YOUR dumping causes us to miss the sun at the bridge I’ll be pissed.” Duly noted and filed deeply within a Siberian latrine. “Hey, this tea is sugar AND alcohol free.”

At the bridge we . . . were surprised to see a few people who were clearly NOT railway workers. We decided to walk across the bridge to inspect it’s condition. We were also surprised to see MANY places where timbers were not just badly rotted exposing large holes but at least two spots where fires had been lit ON THE BRIDGE. The water was high and flowing very fast while making considerable noise. On the western third of the bridge we noticed that the gaps between the ties was alot larger than we’d expected (or it appears on video). The gaps ranged from 15cm to 25cm (6 to 10″) with two nearly 45cm (18″). The bridge was dry though not exactly the kind of thing one would choose to walk in the best of conditions. It seemed on the one hand, wider than expected and yet on the other . . . was actually narrower than claimed. The ties were 2.5 meters but staggered so rather than a bit over 8′ wide it was a bit less than 7′ wide. Tie plates were all loose and clanked even when walked upon by an under 200-pound human. BamBam correctly announced we’d be removing the sidestand on Kim’s bike which had already shown an ability to collect debris. On the bridge, catching would have launched Kim from his “Dakar”. Why would anyone “scout” the bridge before crossing ?

There was a Russian woman on the bridge with a group all from Moscow. Why ? No idea.

But she was seemingly fascinated by “us” and her father had taught at Berkeley 30 years ago and REALLY like the Bay Area.

“What is the purpose of your trip ?”

I don’t know how familiar you are with men on Earth but they do alot of things that are utterly lacking in purpose. The crossing of this bridge and the BAM in general definitely fits into “purposelessness”. So we set about clearing the old wood, buttressing some sections and replacing ties with a stack of new ones on the west end of the bridge. Repairs completed we enjoyed the company of the Russians who’d traveled along the BAM as a holiday ! The Vitim Bridge was their final stop and . . . perhaps they wanted to see something interesting. Several of the Russians refused to walk the bridge. They were from Moscow and offered us assistance and tea. They also offered us vodka BEFORE we crossed which we declined politely, but without regret.

Not long after the Vitim Bridge was Kuanda and another challenge . . . the old bridge had been destroyed and the railway bridge was not open to motorcyclists. Earlier we’d been told that crossing aboard a Kamaz would be required. We rode to Kuanda and then turned back to a very nice campsite above a river that had a breeze that kept most of the mosquitoes at bay until the temps dropped. Cigars & single malt were the order of the evening.

In the morning the mosquitoes had us all in the head-fashions of someone who’s considering robbing a 7-11. If one had existed we would have used it but gladly paid. 🙂