I don’t remember when she appeared nor when it was deemed that she would represent a “Barbie” (some un-specific rating of tipovers, crashes, poor judgment, or inscrutable behavior) but . . . for sure BamBam introduced her and the basic idea of a “Barbie”.

Yours truly escaped a Barbie when I had my 1 kph tipover on the first day apparently because we simply hadn’t discussed it yet. So BamBam held Barbie for quite a while . . . well into the BAM after two astonishingly poor judgment/inscrutable behavior incidents (driving into a pipe on Olkhon Island and then throttling toward a lonely parked auto after departing Severobayalsk). 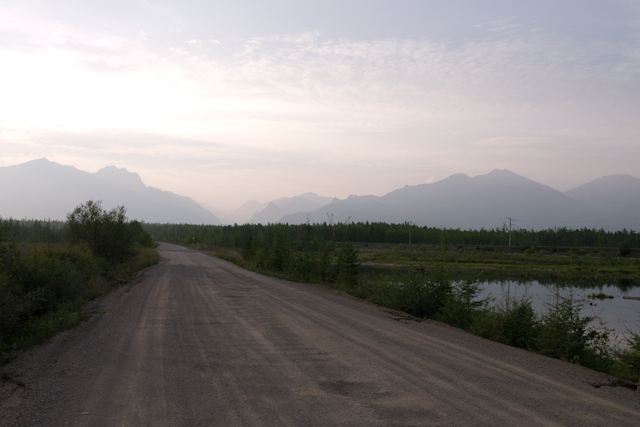 But what about “our” BAM voyage ? Walter Colebatch owns ‘Sibirski Extreme’ and had done the BAM back in 2009. Walter has provided ALOT of information, guidance and inspiration for eccentric motorcyclists . . . so a bit tongue-in-cheek, prompted by the pointlessness of such a venture . . . we opted for ‘Barbiski Extreme’. This helped focus our attention and not dwell too much on the impending challenges on the BAM including the Vitim Bridge, the crossing at Kuanda, and perhaps most worrying, Olyokma bridge. 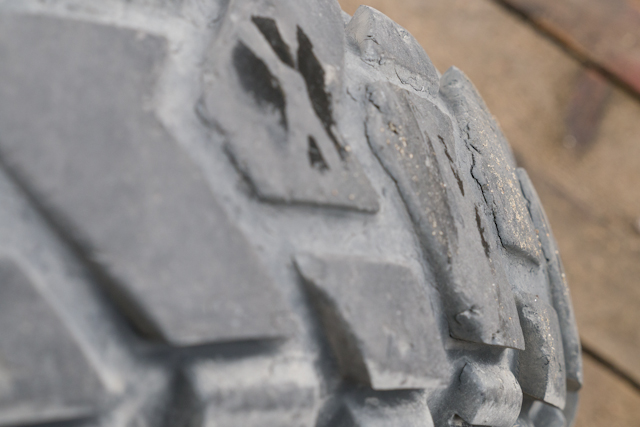 BamBam returned from Novy Uoyan with some makeshift parts to at least get Kim’s bike into the village. The three were busy filing parts, checking fit and re-assembling the linkage. We arrived in late afternoon feeling a mixture of relief and dejection. Progress had started well enough, if late, but now Kim’s trip was at risk. BamBam took great effort to re-install the needle bearings into the destroyed race but my contention was that a bushing was the only real answer given all the water crossings and harsh conditions we were likely to face on the way to Tynda, nearly 1500km (1000 miles) away. (It’s possible that Kim’s rather aggressive speeds had caught up with the Dakar’s overmatched suspension. He’d arrived in UB with a broken shock mount and shock bolt. Neither KTM suffered any suspension issues though BamBam had his rear racks re-welded and broke them again before Tynda. Clearly, calling a bike a ‘Dakar’ and having any capability to ride rough roads loaded at speed is not a given. I’d warned Kim, given his experience till UB, that riding so aggressively was unlikely to be rewarded with trouble free travel.) 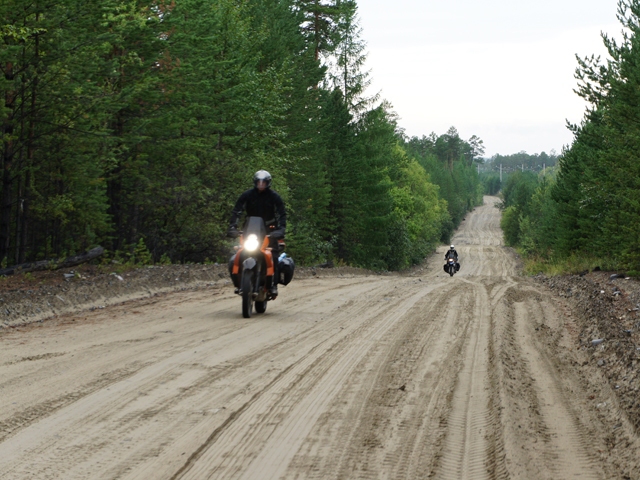 Fast, packed sand out of Novy Uoyan . . . it was great while it lasted

We found a place to stay and secure the bikes and set about looking for dinner. A cafe offered the only choice for a meal and there we were met with grumbling locals who seemed to think we’d not understand any of their rather unfriendly comments about us in Russian. 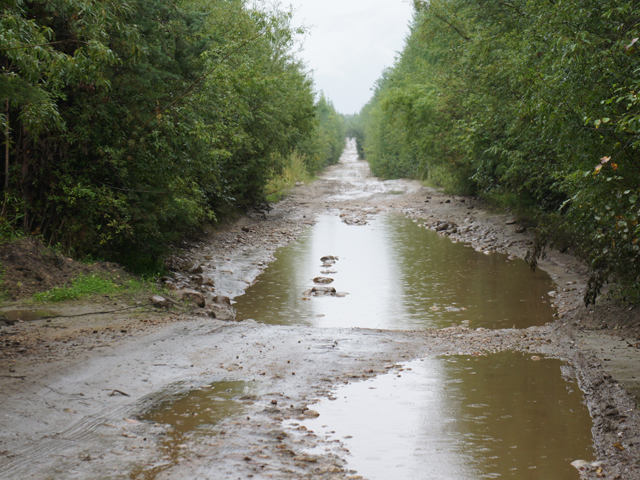 Not so fast, grasshopper . . . the Duckling caromed between puddles, oozing mud holes and shrubbery . . .

The next day we decided to change some tires on my KTM and Kim’s bike while BamBam searched for a machinist who could fashion a bushing. The owner of the “guesthouse” helped me mount a ridiculously stiff Mitas E09 that BamBam and I had purchased from Joe Dakar in UB. Kim upgraded his front tire to a proper knobby while I left the used TKC80 on the front of mine. 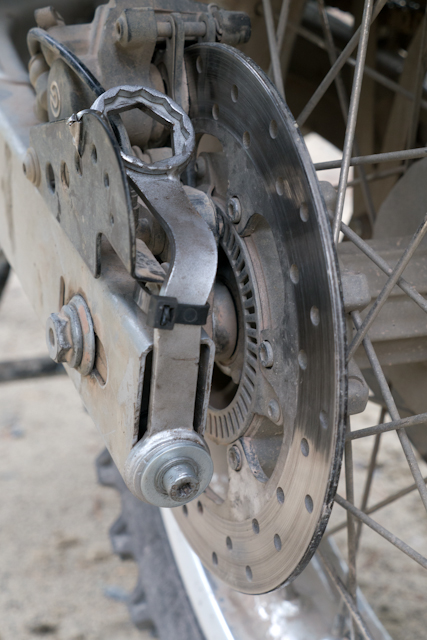 Unfortunately BamBam and Kim did not take a camera to the machinist shop. The machinist nicely fashioned a piece of solid brass, and then, rather than pressing it into the shock link with a vise . . . he smashed it in with a maul ! Crazy. He could have easily have broken the shock link and then the game for Kim would have been up. 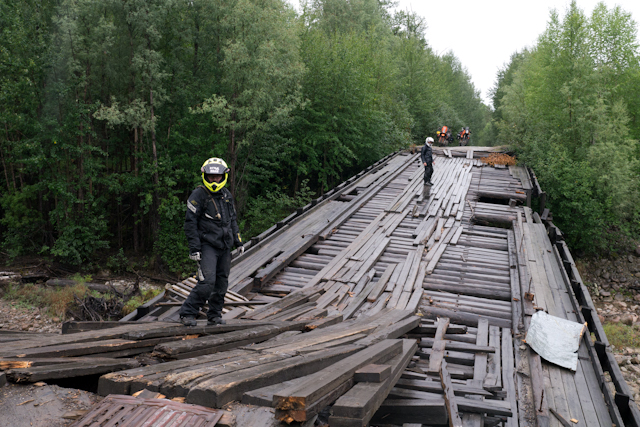 Aside from the essential generosity of the Siberian mechanics the other noteworthy characteristic is doing work that’s “good enough to get you to the next village”. The cost of his work was, nevertheless, a gift. BamBam and I both felt that the bushing, along with the zerk (grease) fitting were actually considerably better than the OEM BMW work. (The OEM link rattled more than a 1/2″ side-to-side !) 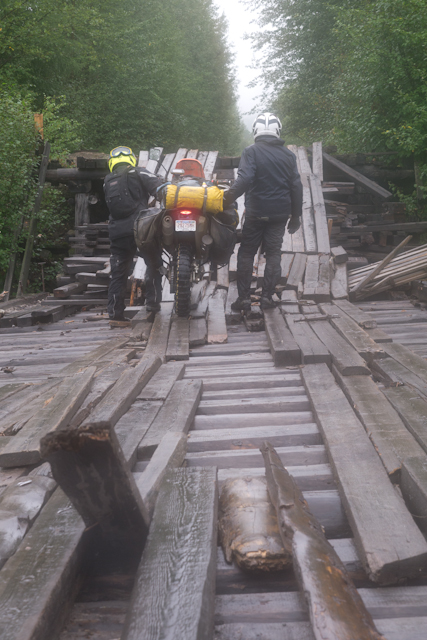 BamBam wanted to ride it but the impaling reinforcing rod on the left and the naked drop into the river to the right forced his “discretion is the better part of valor” . . . along with the pleading of Kim & I

Given our habitually late starts . . . we faced a small dilemma once Kim’s bike had been sorted. We were fairly far north so the sun would set late but weather was clearly in the near offing. Ride out, get wet and camp wet ? Or hunker down and (try again) to leave early, dry and rested ? 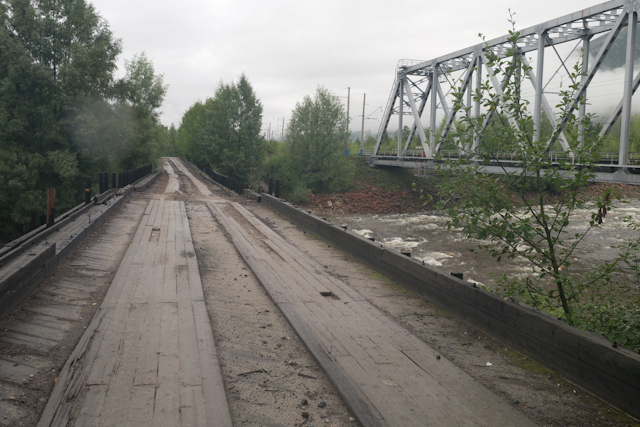 Very nearly my ultimate Barbie spectacular . . . the front end of the Duckling hung up on the “railing” to the right just before exiting the far side, a Barbiski Extreme pucker moment

We opted for departure, leaving at 4PM, which didn’t seem a great idea and clearly surprised the guesthouse owner but ultimately worked out alright. After fueling outside the village we rode on wet, packed sand in a very light drip-drop rain. The track was fast and VERY easy to make speed on. Not so sure how it’d been if conditions had been perfectly dry. It seems both BamBam and I thought (very foolishly) that Taksimo wasn’t impossible. Just as we began speeding along . . . a stop by Kim revealed another issue on his “Dakar” BMW GS. The rear axle adjusters had either come loose or been insufficiently tightened after re-installing his rear wheel following the machinists work on his rear shock link. One was bent, the drive-side one was destroyed. (I have to comment on their absolutely pathetic quality – they were extremely fragile due to the lightness of the metal . . . an irony not lost on a bike that would be graciously described as “tubby”.) Kim mentioned that they were a well-known failure point on the Dakars . . . unsurprising but hardly comforting far from nothing. 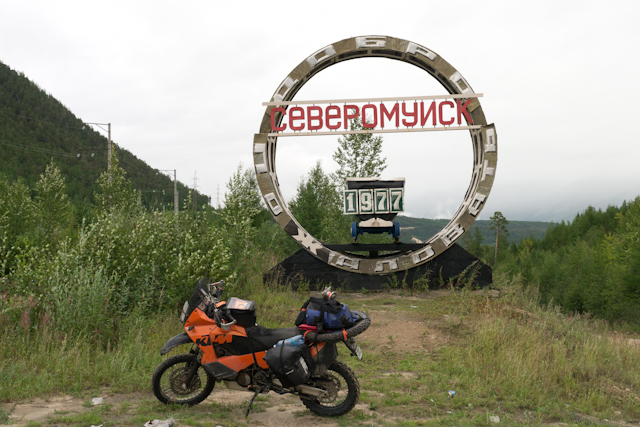 The village gateway erected the year I graduated HS . . . the locals were extremely friendly and we had a great lunch

BamBam fashioned a rescue using one of his KTM tools ! 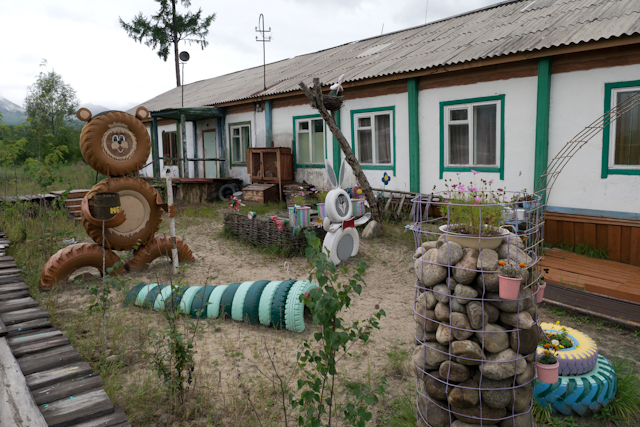 A kid’s school even though we saw almost no kids and very few people . . .

Abruptly, large puddles began to appear that reached dimensions where puddle is insufficient as a description but pond is rather dramatic. And then the mud. For BamBam and Kim on his aggressive knobbies it wasn’t too bad. But on the Duckling, with a TKC80 front . . . the front-end just PLOWED. Purely a prisoner of physics I managed to gather all sorts of shrubbery in my helment, handlebars, forks as I slid from side-to-side on the track. Generally avoiding the deeper parts of the puddles and full on tree trunks, there were nevertheless scores of times when falling seemed inevitable. It must have been great fun for BamBam and Kim to watch. I could only laugh and did often. Relics from the subsidized past of the USSR

Now the rain picked up and eventually dreams of Taksimo were suitably washed away. The mud became more intermittent and I could “skip” from wet sand, spot to spot, over the mud mines. 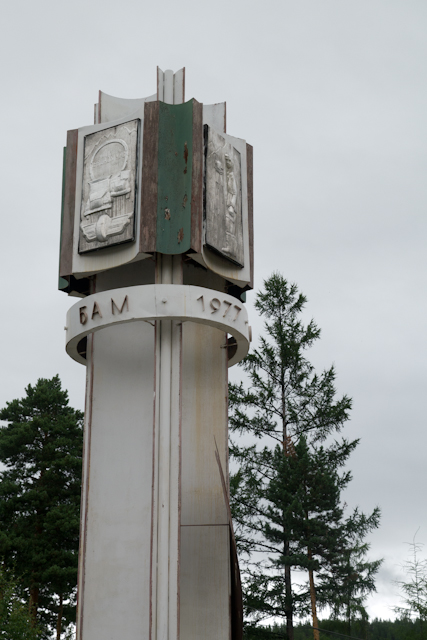 At one stop BamBam rolled up with his consistently ‘Yosemite Sam’ look holding on to my bike’s rain cover. Somehow a strap had been . . . cut . . . and he’d picked it up after it came off my bike. He was very annoyed at having retrieved my flotsam. Later that nite he realized he’d lost his MSR Dromedary bag . . . but this was not a Barbie, for him. 🙂 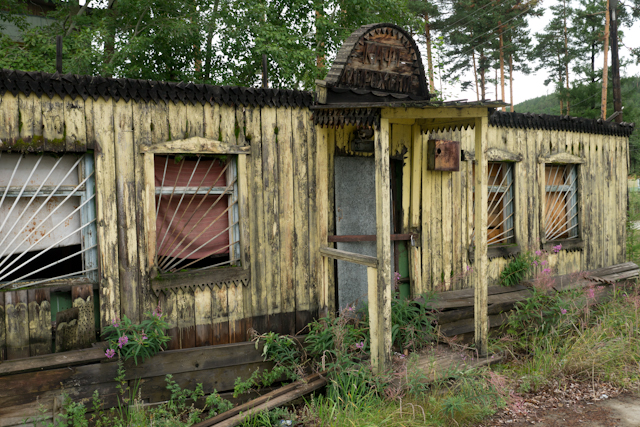 BamBam found a very nice campsite after I’d complained of being both wet and getting cold. Access to the river was excellent and Kim offered to let me sleep in his tent along with him. We set camp and ate some pasta, tinned fish and bread and went to sleep in heavy rain. The rain fell all nite and in the morning as we broke camp. Very quickly we came to our first “bridge crossing”, one that had a broken back and slippery with old oil and water we walked the bikes across. These sort of interruptions came to define the next 7+ days as we would make good progress for 10 minutes to an hour and then . . . a gauntlet of broken bridges, huge puddles, rail bridge crossings and rutted tight singletrack in the hills would slow us.

The last notable thing as we finally approached Taksimo was the “broken bridge”. While we sized it up in the failing light and fog a Russian vehicle approached from the other side and slid (!) down. They stopped on our side and asked us if we wanted a some vodka. BamBam was a little anxious to get to Taksimo before it was too dark knowing that our fuel was tight for both Kim and I and so he declined their offer as politely as possible. BamBam had to give Kim some fuel once and to me twice on the ride in. He was understandably frustrated but . . . again, the amnesia about the DAYS we’d lost waiting for him to sort things out . . . but it was no doubt annoying and a bit unpleasant as temps fell hard as we approached Taksimo and the 690 “supertanker” didn’t want to be stranded, either.