The pavement would end at Kachug and then did so, again, in a rather dramatic fashion outside Severobayalsk. We rode fairly fast on pavement and it was nice to have a few hundred km under our wheels by lunch. Crossing the Lena was significant, at least to me, even if it was relatively modest when we did it. The Lena is a truly colossal river, even for Siberia, and in places is nearly 7 miles (11km) across. The mighty Lena eases past ruins of the formerly mighty USSR

Villages were small, often VERY rustic – limited power, all wood buildings, many dating from the early 1600s. Horses and livestock lined the dirt road as we followed the marshy Lena river valley north. Then began a long stretch of rather perfunctory dirt through taiga – long stretches through large rolling terrain punctuated by sandy washes, loose dirt, lots of potholes, dried and semi-dried mud tracks. We passed a number of solid fishing opportunities but too early in the day or not private enough in Kim & BamBam’s view. Eventually the sun began to set and we were far from water but always well within the proximity of lots of swarming mosquitoes. A few searches always seemed to turn up rather unfriendly campers that BamBam felt bordered on the nearly threatening. So we ended up camping off the road, out of sight, in a dirt clearing that was also an apparent maintenance depot. We made a fire to control (?) the mosquitoes, ate dinner and slept. The next day was more of the same, which wasn’t too bad as though it was really dry and dusty it wasn’t muddy which would have been quite a challenge. The day was themed by me generally following well behind to avoid the dust on my face shield. My open-face helmet might have many advantages for greeting locals, but it was a nightmare to keep clear. I often couldn’t see and that, along with the preload on the rear shock being far too low and my lack of riding the KTM for two years prompted me to pick a careful line which was, apparently, too slow for BamBam’s taste.

We had a nice lunch near the “3 bears” sign. There’s not alot of differences in the menus but there can be considerable differences in the quality (and cost) of the food. There is little correlation between cost and quality . . . or portion size. Portion size and cost might often be inversely related . . . Anyway, right after lunch we re-mounted and BamBam had a spasm and sent the 690 hurdling toward a parked car (the only one for 100’s if not 1000’s of meters) and was able to fall over before hitting it. BamBam was not going to give up Barbie anytime soon, it seemed. 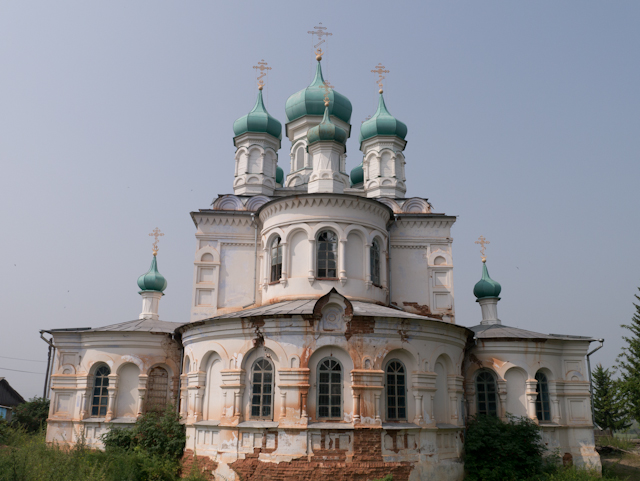 The other semi-regular occurrence was rounding a bend to find Kim explaining how BamBam had entered a turn or approach to a washout at mach and nearly crashed, badly. Speed kills . . . I can ride boring dirt roads in Norcal but the risks are far less as help isn’t remote. We gassed up a final time before the run to Severobayalsk and at that juncture I noticed a large oil run on the engine between the cylinders. The bike ran fine but the oil leak was not re-assuring. (It turned out to be the oil sender which is a well-known issue on the 950/990s that I was NOT aware of – it caused some anxiety but is harmless and I rode with it for another 8,000km (5000 miles).) At least it wasn’t a 690-type show stopper !

I’d already grown weary of BamBam’s ideas of progress (and his rather astonishing discounting of the 8 days we’d SAT in Irkutsk for him to get his bike running . . . ). So . . . as we neared Severobayalsk I caught the boys waiting at a ski run ruin. We had a brief chat about the tourist economics of Siberia – BamBam thought he’d be happy to snowboard there. I thought that the tourists who could come – Korea and Japan, had much better options much closer to home. Eventually I suggested that we move on as there was a large trailer truck barreling on behind me and that we didn’t want to get caught. No sooner had I mentioned this than we could hear it coming, fast.

I took off and decided to have some fun, in front, with a bike (if not current practiced rider), that could make very good time. Very quickly I confronted a dust cloud in front of me, as was often the case on the Zhigavalo Trakt, and had to overtake it on “faith”. This happened three times on this final leg into Severobayalsk. The first two were relatively straightforward. But on the third cloud to overtake, the cloud was moving quite briskly. It was a Lada Nova (think small 4-wheel drive hatchback built with perhaps 60’s technology) that I chased for some time to find a passing opportunity. When I finally did get around it a brief check of the speedo showed 140kph (86mph) indicated, probably actually closer to 80mph on a nice film of dirt over hardpack. Easy place to go down at speed. I blasted past and upped speed. I waited nearly 10 minutes for BamBam and Kim in Severobayalsk. BamBam explained that he’d only gotten around the Lada on a steep uphill, where it’s speed dropped precipitously. We made for a hotel waypoint and were extremely lucky to find a room, for just one nite. We walked for a while to find dinner from our room and eventually a taxi drove us to a restaurant where we were later joined by a group of young Russians. At dinner BamBam commented about the sportbikes we saw in town and how crazy it was. They were essentially limited to riding around in a small aquarium of tarmac surrounded by dirt tracks, bordered by Lake Baikal. This reality did not damp their gusto when employing the throttle. Again, lots of Soviet era apartment buildings and little evidence of any real economy. The next morning we ate breakfast in the common room and here BamBam made himself a memory with some european tourists. He was describing a superficial injury when he stood up and pulled his workout shorts up quite high to reveal not a small fraction of his gluteus maximus. The gasp of “mon dieu” behind me was deafening . . . we were hardly able to “deny” we knew him but Kim’s head sank and I just wished BamBam would sit back down. Then, after our breakfast moment we returned to our rooms to finish packing up and prepare for departure. A woman from the hotel went around checking for the provided laundry. BamBam had apparently left his somewhere and she was going to ensure that nothing left with us. When he found it he offered it to her on bent knee in a rather obsequious posture that she clearly did not appreciate. BamBam defers to discetion . . . after a while

Ah, the charm offensive continued, un-mitigated by clear rejection(s) . . . Whenever we met with an uncooperative or uninterested person (not difficult in Russia . . . customer service is still something of an odd concept there), BamBam always asserted it was because “you didn’t let me take care of things.” This went on and on . . . In Irkutsk we’d moved rooms in the place Michelle had found us and BamBam had “taken care of it”. It turned out that there was quite a misunderstanding and BamBam simply avoided the follow up conversation, nearly forcing Kim to clear it up. The obliviousness continued . . . ANY marketing is appreciated in the middle of nowhere . . .

We rode out, eventually, never early, and figured Novy Uoyan was entirely reachable. The ride was fairly scenic, even with the slowly dissipating fire smoke haze. Weather was great and the ride along Baikal was invigorating twisty tarmac. We made great progress and then suddenly, on a sharp left-hand turn the tarmac simply ended while all of us were rather tightly grouped and moving quite fast. A minor moment of pucker-factor and then a quick decision as to which was the correct track to take. At a bridge (they were dust free !) we stopped and lunched. We were all feeling good about progress and the ease of reaching something distant. Weather was clearly in the offing but not for at least a few more hours or even the next day. Two vehicles stopped to chat with us and then a lone Ural motorbike with sidecar stopped and shared his sugar-coffee and had a smoke, while examining our bikes. BamBam really enjoyed showing him his 690 and all the markings from already previously visited countries. That bike was closer to my age than not . . . he was as tough as a Siberian bridge

Just as we prepared to carry on, Kim announced that he had a flat. We learned that it was due to the sloppy work of the shinomontazh just the mainline side of the Olkhon Island ferry. But there was worse . . . the bearing race on the upper link was effectively destroyed. Kim’s trip was suddenly very much in danger. At least we were only about 20km outside of Novy Uoyan. 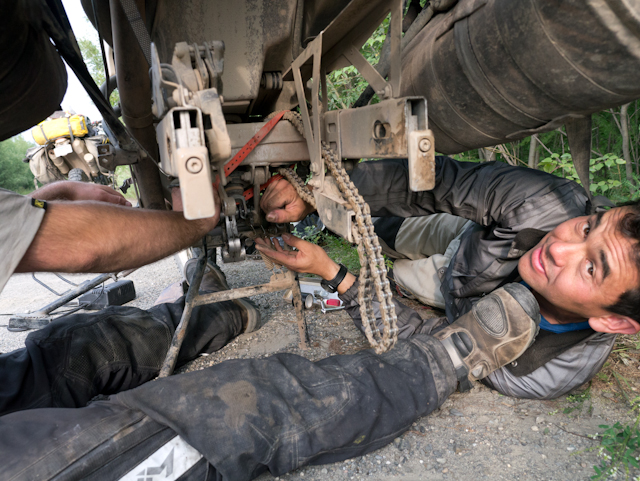 On closer inspection . . . neither BamBam nor I recommend this bike