The beauty of an overly ambitious goal is the speed with which events will be summoned to crush it.

And that they did.

The good news, at least for followers of this hapless, pointless ride, is that almost all the bad news is front loaded.

Arriving in UB on 10 July I quickly got to the Oasis and retrieved the KTM from the basement with some help from fellow travelers. Since last visiting, the Oasis had abandoned the recycled sawdust pellet stove/oven to heat hot water and resorted to a conventional, far sootier fuel. The thickness of the dust film on the bike, even with the cover, was a bit shocking.

I got right to preparing for departure on the 13th with Chris, a school teacher from the UK who is also a moderator on the HUBB. Things proceeded well and largely according to plan until I started the bike. Almost as soon as operating temperature was reached a very noticeable water leak could be detected. 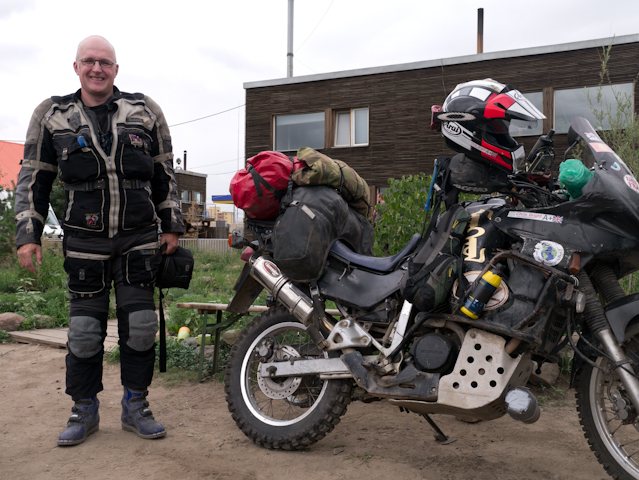 Apparently the Mongolian Gobi Coolant or perhaps the rinsing of the white vinegar flush had played corrosive havoc. A small aluminum pipe that connected the water pump and radiator had corroded through. The only good news was that it didn’t bare witness halfway across the BAM ! 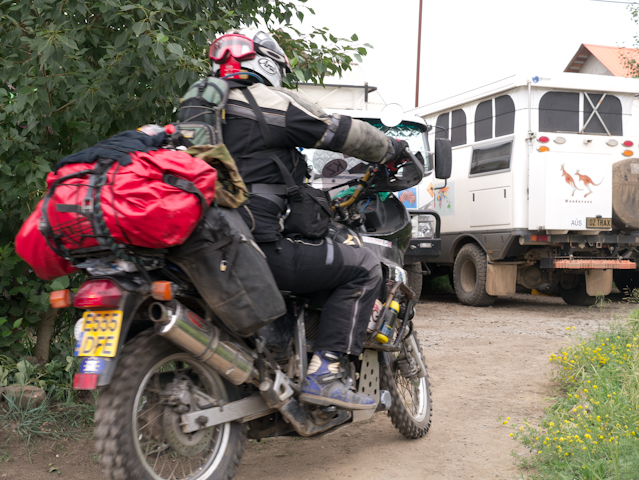 Who says only 4-wheelers can be overloaded ?

So that scuttled my departure and set in motion a search for the rotten part’s replacement. An Austrian (Michael Fritz) on an Africa Twin called his German buddy who owns a KTM shop and secured one. Michelle found another (it seems the ONLY one) in North America (Canada, for the record) and a race was on to see which $25 part with $80 shipping would get to UB, first. 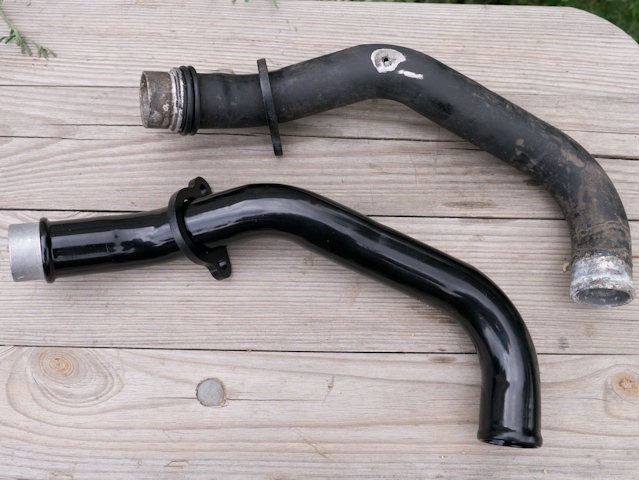 This left considerable time for . . . overhearing other tales of adventure, plans and woes. The normal invasion of rather huge overlanders circulated with vehicles that were between 2 and 12 metric tonnes and had tires which were up to nearly a meter (40″) high that cost over $500. Unsurprisingly, I’ve never seen any vehicles like this on my rides – they have to stick to busier, better maintained roads and for that there is a cost. 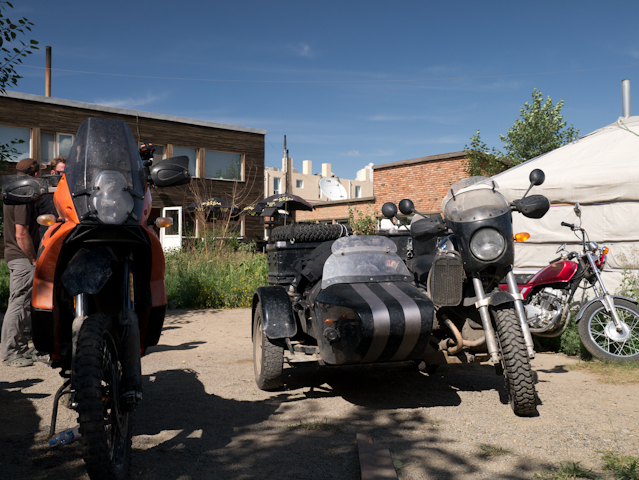 A young Dutch couple rode this side hack that he’d built himself.

Several pairs of riders showed up targeting the BAM. Jon & Andrew on KTM 690s (Jabamundus) and Felix and Phil on BMW X-Challenge’s. Peter and Ben were a mixed pair of a DR650 and an X-Challenge. Three young Brits made there way out on XR400s where Matthew’s suffered a blown shock. Later one of them would make it to Magadan and another would suffer a very bad crash about 200km north of UB. There was the normal mix of near rookie through veteran travelers, on ancient side-car to gigantic 6-wheel conveyance. Newbies could be largely correlated to newer vehicles carrying larger amounts of gear, but not always. I’m no longer amazed by motorbike travelers who insist on carrying proper chairs or raised bedding (!). 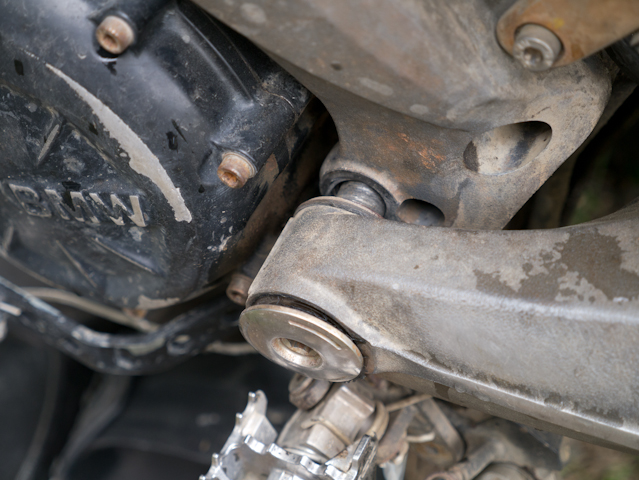 Lots of broken bikes – like this BMW with a broken swingarm link. 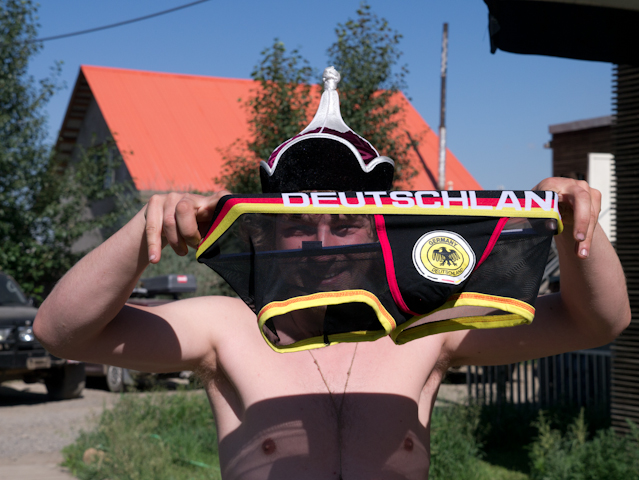 Without a doubt the most intriguing group of riders were led (?) without map nor GPS on a flock of Honda C90s. The “Super Cub” is the VW Beetle of the motorcycle world having surpassed 60-million produced since 1958, is STILL in production (though woefully lower quality out of China). A group of under 25-year olds and over 55 year olds with a single 40-year old translator. My first motorbike was a Super 90 ! 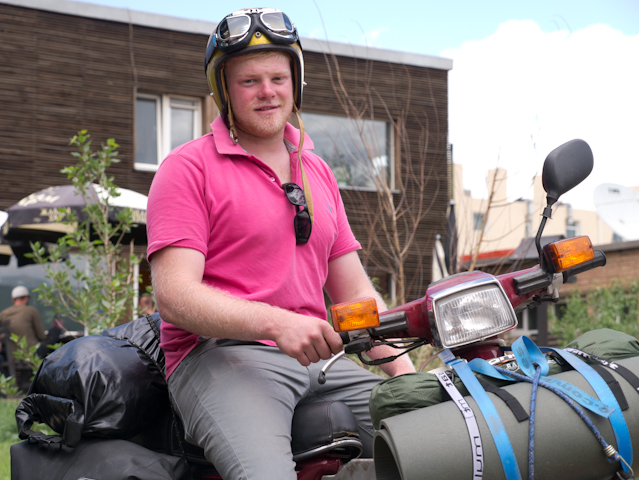 The Chonda Challenge aimed to ride the C90s about 11,000km (7,000 miles) across Mongolia, a bit of Kazakhstan and then Russia onto Europe finishing in London. The first guy to show for the Challenge was a 19-year old from the UK. A long bow to his parents . . . 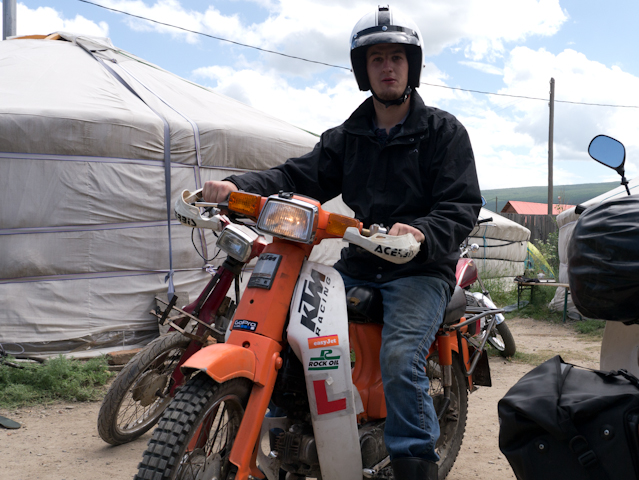 The ‘L’ is for ‘Learner’ – he does not have a full-fledged license and is just 19 ! (The color of the bike tells you where his heart is.)

At some point Ed and a mate returned following a “problem” with one of the C90s. This required a 24-hour ride in a Russian “Wazzik” (UAZ-452), a vehicle of surpassing abilities and scant comfort (if it’s not the woodburning stove inside it’s the dense hydrocarbon fumes which surely the wood stove will trigger . . . the “suspension”) . . . looking more relieved to have survived than exhausted. They went to the market, returned with a Chinese C90 and stripped the engine and wiring harness in about 15 minutes with a few hand tools. (It takes a MotoGP team 90 minutes to remove the engine in the F1 of motorcycles !) And off they went, back toward the Gobi. 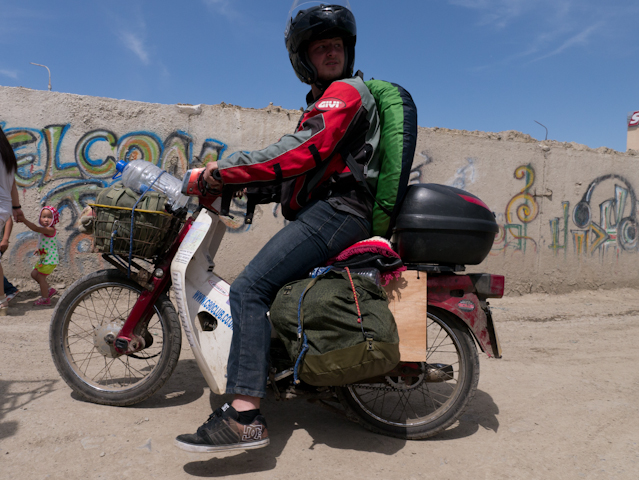 During the next . . . 17 days (UGH !) I tweaked little things on the KTM, re-organized my gear countless times . . . moved from Ger to inside room back to Ger . . . and became a bit of a joke to Oasis staff and no doubt others. Having arrived “off the couch”, without riding the KTM in any meaningful way for almost 2 years and with little other riding in the previous two years . . . not a little exhausted from a rather intense 19 months on a startup . . . my attachments to a ride were strong but not unbreakable. If the part couldn’t be secured – fine. I’ll come back.

One of the most enjoyable guests was Michael Kratochwill. An Austrian who regularly admonished several us with “I’m am NOT a German !” To this I would respond, “Ok, speak Austrian to me.” Michael rode a KTM 950 SE from his home in Austria to Mongolia followed by two friends in a small car. Once in Ulaan Bator, they sold the car and flew back. Michael rode his KTM back via a visit to Lake Baikal. 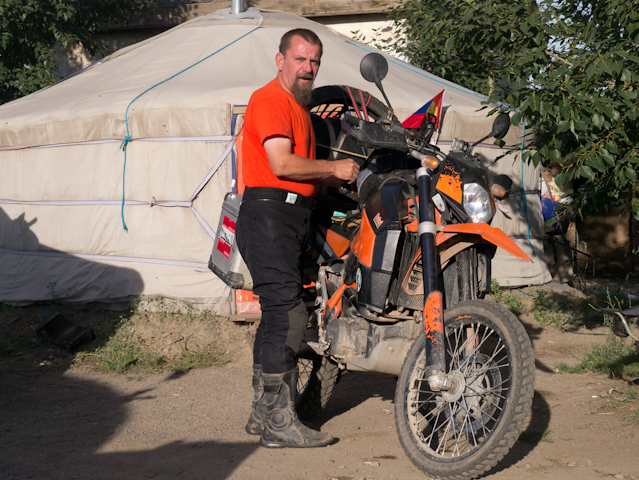 “What, you have Dengue Fever ?”

Once the $25 aluminum pipe arrived it was installed, following another “special” charge from UB DHL ($25 part, $200 in shipping and “customs” fee). As soon as the bike came up to operating temperature there was unmistakable evidence of pinhole leaks in the radiator. I wasn’t shocked, but I was a bit shaken. This looked like the final curtain on 2013. Working at a startup for 19 months is not exactly ideal prep for the planned ride . . . but I REALLY needed that ride.

Rene and Sibylle of the Oasis suggested contacting the local “KTM” dealer who . . . said he’d take the radiator off a new 990 in his showroom and sell it to me for $500. Done. Michael Kratochwill was departing in another day for a “Biker Party” on Lake Baikal and the plan was I’d join him.

Arriving “off the couch” I’d assumed that my need for so much sleep was just simple fatigue. And in some way, perhaps the down time had been restorative. But a phone call with Michelle alerted me – “Uh, Chris and I have Dengue and he quite badly. Your fatigue might just be a symptom.” Ya’ gotta be kidding me.

The next 3 nights I had very bad chills and difficulty breathing. I staggered to the loo with compromised balance and . . . watched as other guests greeted my “dengue” response with disbelief. Seriously, this is quite a test and I’ve not ridden 50 miles !