Unable to emancipate myself from some rather lengthy and pressing software development . . . I escaped to Mongolia to inspect the Duckling. After last year’s fever what would be the state of it’s heart ?

My to-do list was almost thirty items long when I arrived with the most salient and critical items being the water in the crankcase oil and the state of cooling system. Not wanting to confront potential utter disaster immediately . . . I saved those items for nearly last. Illogical, irrational and . . . an obvious avoidance of potentially devastating news. Surprised ? 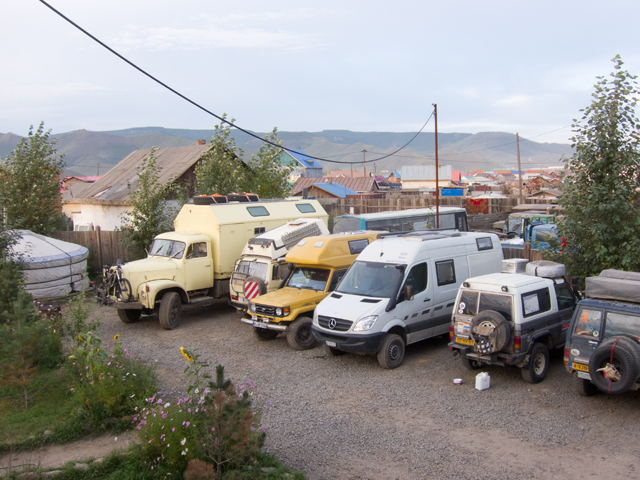 Weather was good, even warm and this time the Oasis was FULL. That was very different from last year. A large number of vehicles and guests were on-hand in a variety of conveyance. From bicycles to modest motorcycles, camper vans, small SUVs to . . . a vehicle viewable on Google Earth and quite appropriate for laying siege to Poland. And it’s French pilot, “Fred”, seemed entirely capable. Fred was on a 5-year RTW (round the world) with his family. 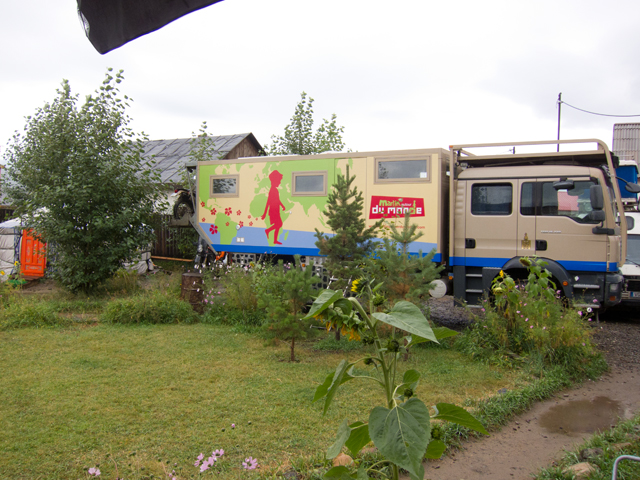 Invading Poland with a large vehicle and the pretext of "peace" - never been done before !

German was the overwhelming spoken language followed by Dutch and then English and French (a tie !). Just two Americans including me. Billy Romp . . . THIS is the way to travel. Light, in the “old” black, with a Mandolin touching many with his music and stories. He seemed frustrated ONLY with his very American humor not penetrating the German-speaking crowd. When requested Billy seemed unable and perhaps uninterested in playing anything newer than the early 70’s. One night he opened with three tunes from the ‘Wizard of Oz’ and later played an interpretation of Copland’s ‘Appalachian Spring’, as American as anything ever composed. Billy’s ‘Ulaan Bator Blues’ . . . was hilarious and just a teeny bit “blue”. 🙂 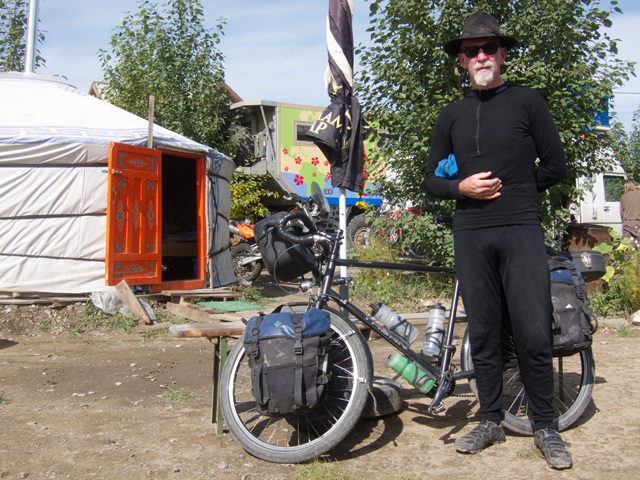 There are many reasons to travel and especially to places that are a little exotic. But the Oasis, and it’s amazing owners, Sibylle and Rene, host/shelter/shield-the-public-from a fairly large number of the small crowd of eccentric travelers that think going overland to Mongolia would be “cool”. A variety of “careers”, ages, gender and conveyance are the easy takeaways. On this visit my goals were mundane tasks, time permitting only a potential test ride and a brief visit to the Chingiss Khan statue complex east of UB. 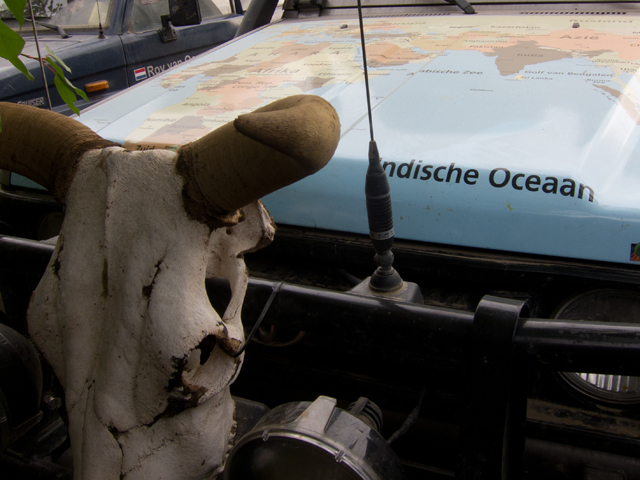 Thanks to one and all at the Intergam Oasis for making my time there so fascinating, funny and enriching. Conversational topics that would implode into ideology remained civil and ENGAGED by the overwhelmingly european guests at the Oasis. The younger visitors were educated, interested, outgoing and aware of their world. Granted, given their european background they were a bit less optimistic than this Yank – but whose not less optimistic than an American born right up until the late 20th century ? For me, the somewhat less than sanguine articulation of the world’s challenges, it’s wonder and dilemmas by young europeans underscores why I think they and (northern) Europe will be relatively fine. You can’t move forward until you have at least some idea of where you are. In short, the clarity and cogency of their, to American ears, pessimism is ironically considerable evidence for being optimistic. I was honored to listen to their views, goals, hopes and descriptions. No doubt Michelanagelo’s father DID have to make his OWN paint brushes . . . but many young europeans are entirely more aware of their world than their north American counterparts. How could that not benefit them and Europe ? It certainly makes conversation far richer. 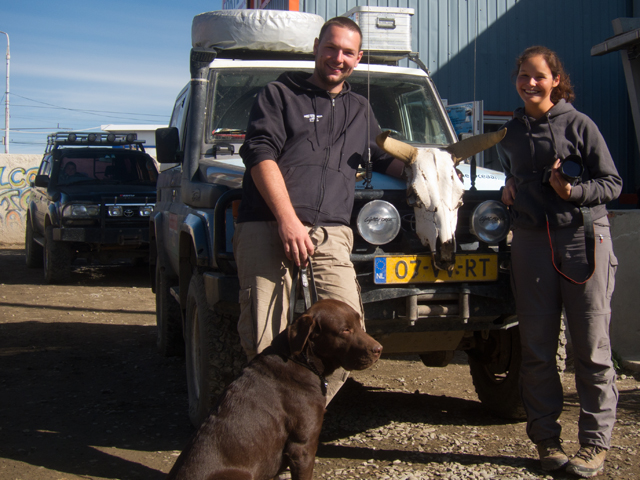 Not that it was just the “kids” carrying the load. Max and his girlfriend rode R bikes from Austria, even taking a good chunk of the ‘Northern Route’ in Mongolia on them. Another couple from South Africa were on a HUGE ride on two “little” GS BMWs. A Swiss couple had their 3-year old daughter with them. They provided tremendous enjoyment and insights into riding, gear, the world, places to visit . . . living. Thank you.

If anyone feels missed, unmentioned or slighted – please inform me when you visit in Thailand. You’re all welcome, all the time.

So about our “heroine” – now known as ‘Berta’ thanks to Roy, a tall Dutchman who had enough LPG in small cans in his small SUV to flatten all of UB ! Well, it LOOKED pretty bad. Water in the oil, even after last years oil change. But when I pulled off the water pump cover . . . wow. “Well, Dr Frankenstein, it’s heart is beating but the face may need some work . . .” 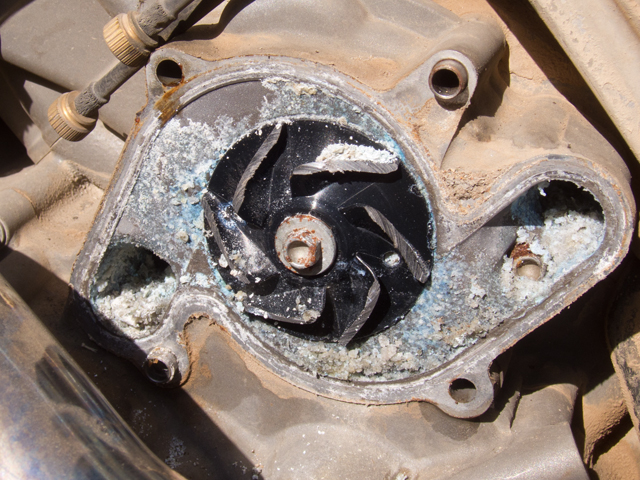 Yeah, it looks awful. REALLY AWFUL. But the crystals had gathered nicely at the water pump and not clogged the radiator. The consistency was like a fine paste . . . it cleaned up quickly with a bit of white vinegar diluted with water. There were some tense moments like the pump bearings being both frozen AND stuck in the crankcase cover . . . but time heals all (in this case). New parts went in relatively easily and . . . she started IMMEDIATELY on 11-month old fuel. 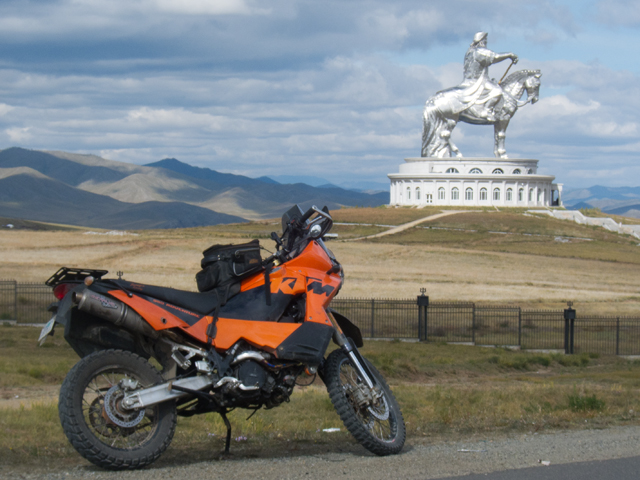 So I rode out to the Genghis Khan statue to see a brushed stainless rendering of my ‘management guru’ (really, doesn’t matter what you read on the man or the Mongols, though ‘The Devil’s Horseman’ is a fine start). Berta was wheelie-ing easily and in 150 miles of riding returning over 45 MPG. The first 3km spin was shocking. I almost cried being reminded of how much FUN that bike is to ride. My last fix had been almost a year . . . too long.