The end of Part I . . . a dusty, congested chinese hell-hole

Morning came and it was a fact that I’d be able to ride the remainder of the distance, 530km/330miles to Ulaan Bator on tarmac.

It was cold, probably low 20’s (Fahrenheit). The lady of the house looked exhausted from the previous evening’s drunk clearing extravaganza.

She slowly prepared to make breakfast and provided salt tea in the meantime. I packed and prepared to “dine and dash”. When I checked the coolant in the Duckling the radiator cap did not want to come open. Ice. Dang. Or worse. A second day when starting the bike will be a test to see if I’ve destroyed the bike in a minor or major way. What fun.

Breakfast was the most ridiculous pile of fatty sheep meat on noodles EVER. The fat literally shook for seconds after the bowl hit the table. It was kind of ghastly but . . . I was REALLY hungry and ate till my considerably shrunken stomach protested. (This meal would be re-visited in another 15 hours . . . )

So fueled up, both Duckling and weakest link, we prepared to start off. It was 10AM and thick high cloud meant a day without increasing warmth which once underway might provide comfort to the Duckling’s fevers. 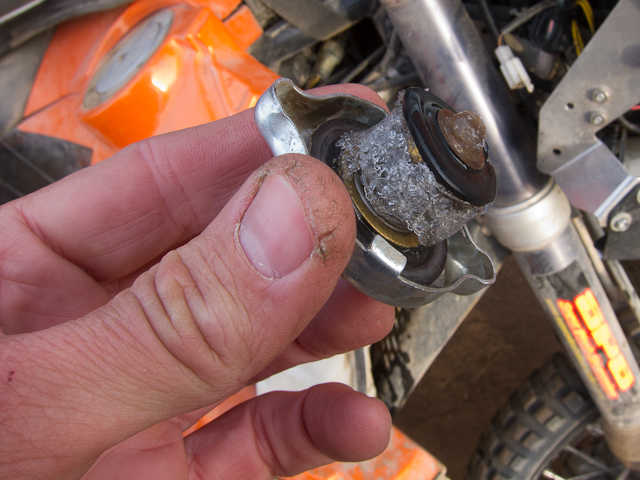 She wouldn’t start. The battery died fairly quickly. I can’t say I was surprised. Something has to spice up the day, right ? If it were just a ride across lots of nothing but beauty and fun motorcycling – how lame would that be. Never waste a (near) crisis, right ? So I scrambled to find someone with a . . . battery. Thankfully, there was a diesel truck being unloaded that DID run (there were several that were in various states of “repair”). The owner was only too willing to give me a jump.

So off came my gear, out came the tools and access to the battery. A small crowd of local yocals gathered offering all sorts of wisdom . . . in Mongolian. A man in a good looking cowboy hat started picking at the Duckling. I smacked his hand to the gasps and laughs of other locals. Apparently he was somebody.

The jumper cables were crude but . . . this isn’t Switzerland . . . precision is for people still riding around in Basel. The Duckling turned over and fired. Bitch. I disconnected the jumpers and tried again demonstrating insouciance for the locals. They reflected it right back in triplicate.

At Bulgan, about 80km/50miles away I had to change money for fuel. The bank took FOREVER, of course. The GPS wanted to send me into a goat herd amongst wood shacks on a mud road. . . yeah, right.

The woman who shooed away four drunken Mongolian men and her son.

The town of Erdenet was a shock. There were multi-colored roofs on the structures but there were so MANY of them. The Duckling complained not a bit. Relics of Soviet “guidance” appeared – huge, closed ruins of central planning and the socialist way.

The light didn’t encourage photography and neither did the distance I needed to cover, even on tarmac. As the light fell I was still 100km/60 miles from UB and was having a hard time seeing the road. A stop for a final benzine replenishment permitted a chance to upgrade my cold weather gear. The Mongolian attendant seemed to shiver while watching me.

Traffic became positively heavy with lots of vehicles using their brights. I wasn’t blinded. I was blind for the last 30 minutes.

Ulaan Bator has changed alot. It was a bit sleepy with some disturbing sights, like most urban areas in the world, five years ago. Now it’s a chinese hell-hole with inconceivable amounts of traffic, dust thick in the air and the fragrances of diesel exhaust everywhere. Ridiculously pretentious signs offering hair care, karaoke, pubs, international goods, and . . . sushi were everywhere. Mongolia’s population is about 3.5 million. Hardly the warm welcome I’d been figuring on. Oh well.

The Duckling wasn’t impressed either and had a fever fit . . . I had to ride through truly homicidal traffic like Paul Revere on speed to get to the guesthouse, the Oasis. It is, was and will be !

2 Responses to The end of Part I . . . a dusty, congested chinese hell-hole