Another morning breaks clear and believe it or not, my anxiety and concerns regarding the Duckling are like the long-term memory of a dog . . . nyet.

The ride out of Tes was reassuring, even comforting. The daughters of the house I spent the nite in opened up the gate, with one of the daughters using her entire body weight (65 pounds) to slide the logpole off it’s mooring. They waved and laughed as I fired the bike weakly with it’s still cold little battery. 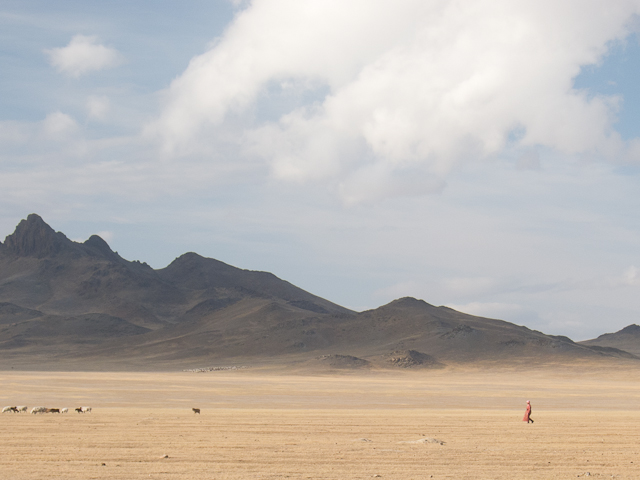 A stop at a store for some snacks brought out a crowd to examine the Duckling to it’s normal raves, smiles and incredulity that anyone could actually climb UP on it’s higher than a meter (40″) saddle.

The clouds provided great shadows for viewing and photographing and the day just seemed full of promise as they always do to someone who can’t remember the previous day’s challenges . . . 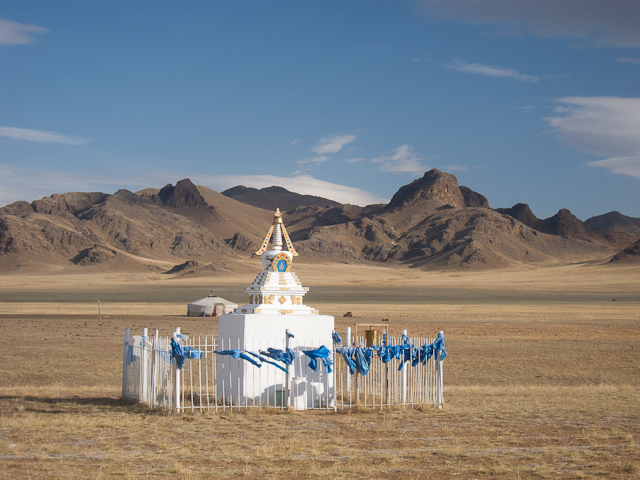 Stupas and other signs of Buddhism become more common where people live permanently, not just nomadically.

At Bayantes I re-fueled at a “station” that had a hand pump to deliver the benzine. The pumper was one giant grin and exceptionally friendly even by the high levels of Mongolian hospitality. They really remind of the Thais except for the cold and the incredibly bland food. 🙂 The Duckling’s fuel economy remains very high inspite of it’s cooling issues and the fact that 3rd gear is rarely visited and almost never exited up. 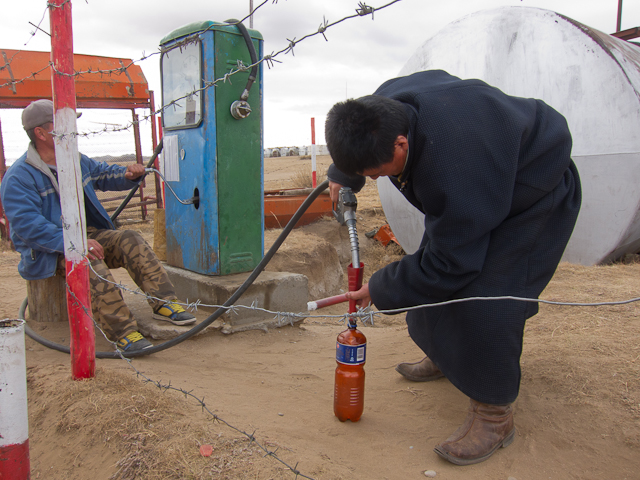 Yes, that's a hand crank for the benzine pump. Who needs electricity ?

It was fairly cold but very sunny and that made it seem warm. The scenery was spectacular. 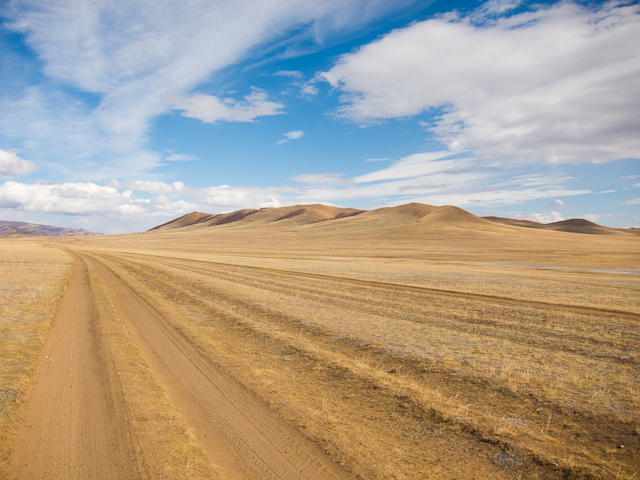 The terrain was largely grasslands and often, finally, provided a relatively smooth track. But the interruptions of some climbs were just incredibly rocky and often with long stretches of goat head rocks. Really, it’s amazing what tires can put up with. Several stops were necessary to fill the radiator and by now the ‘black eye’ was evident to all. I’d removed the right side fairing so that I could add the water easily. So a Duckling looked even more forlorn. (Fear not – my astonishment at the bike’s ability to navigate this terrain has now turned into pure worship. She’s become the “little engine that could”.) 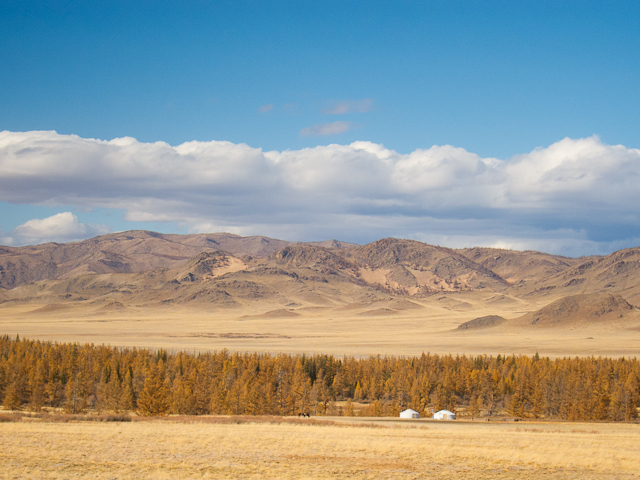 Do you think they TRY to put the gers in scenic places or is it that they have no choice ?

All the similar patterns re-appear. The ambient air temperature climbs and the feverish behavior of the Duckling becomes more volatile and more insistent. The good news is that Tseterleg is ONLY 200km/125 miles away . . . 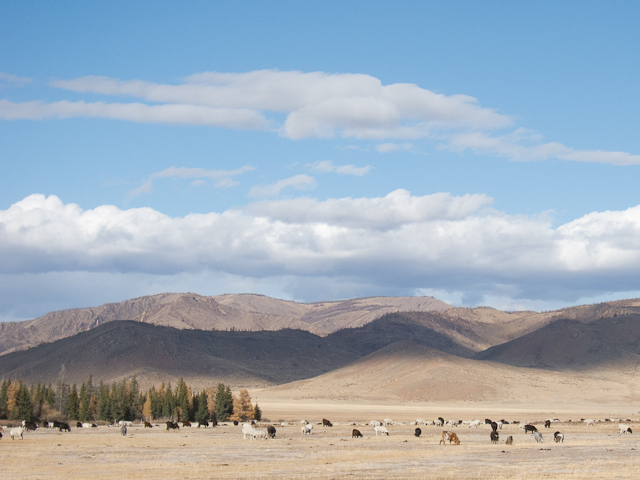 Ulaan Bator maybe an asymptote but . . . “we shall never surrender”. I’ve confirmed via SMS to Batbayar in UB that Tserterleg and Morun are potential winter “resting places” for the Duckling if necessary. My attachment to achieving a UB landing, however, remains somewhat irrationally strong. 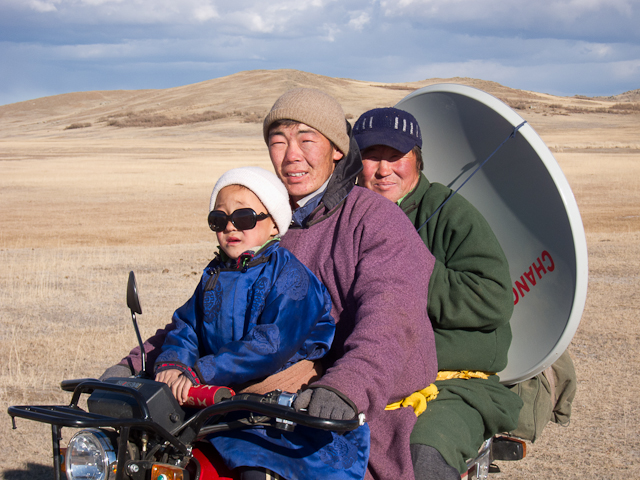 Yes, it is possible to look cool on a 100cc chinese motorbike with three people

Several times while refilling my water containers in rivers and streams Mongolian herdsmen on horses come over to share a greeting and an examination of the Duckling. 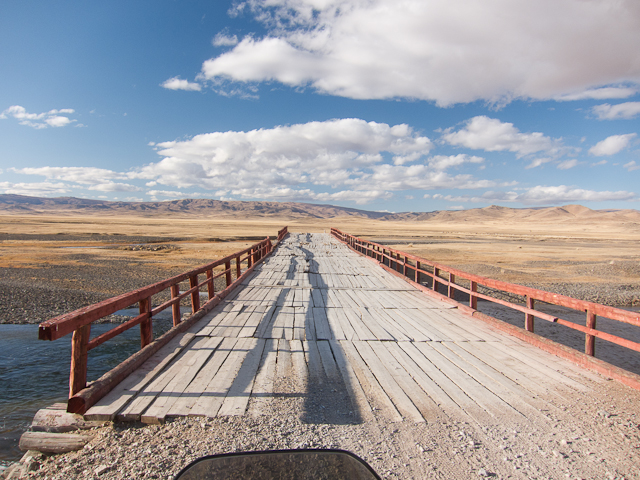 This bridge's top planks were unattached . . . when the front tire touched the near end, the far end lifted into the air.

Without too much drama I manage to make it to Tserterleg by 4PM. The only unfortunate facts are that Tserterleg is relatively high (6500’/2000meters) and it’s COLD. Thankfully I can at least shield the Duckling from the wind. Temps overnite fall to the low teens (Fahrenheit) . . .

The guesthouse owner provides me with a thermos of salt tea, some good noodle soup and a HUGE bowl of noodles fortified with fatty sheep meat. My body odor has definitely changed – the sheep fat I figure. I’m really looking forward to a shower and figure even the Mongolians are looking forward to my shower, too . . .

The guesthouse has two additional guests, two Mongolians who are conducting a training for local teachers. This aimag (province) has embarked on a very radical educational program. A large dormitory has been built to house the children of herdsmen during the week. They return to their families on the weekend. An Australian mining company is funding the training whose main goal is to help both the teachers and the parents establish ground rules for communication and mutual responsibilities to keep progress (and options) for the children apace. Both of the trainers seem to be earnest, sincere and very interested in helping their people and their country. It’s heartwarming but also hopeful. They have plans, milestones and . . . unlike what I too often observe – they facilitate conversation by ALL the locals and mostly, they LISTEN to, not TELL the locals what or how something should be done. (I’ve grown a bit weary, in Thailand, of well-educated, but practically-speaking, somewhat crippled westerners whose backgrounds in History or Statistical Analysis instruct locals on how to prioritize their “progress”.)

The next morning the trainers take me to breakfast in the local school for breakfast. The children participate in ALL chores and teamwork and responsibility are shared eagerly by the kids. I felt extremely fortunate to observe all of this. Given the cold and the bikes inability to start it was a fantastic way to begin a day.

During the evening one of the trainers and I chat and he shares with me differences of perspective that Mongolians have regarding many things. Nomads remain extremely proud of their independence and regard the outside world somewhat skeptically. Their way of life has sustained them for millennia and while they sometimes have motorbikes and satellite TV, even a single nite with a Mongolian family reveals exceedingly low levels of “westernization”. 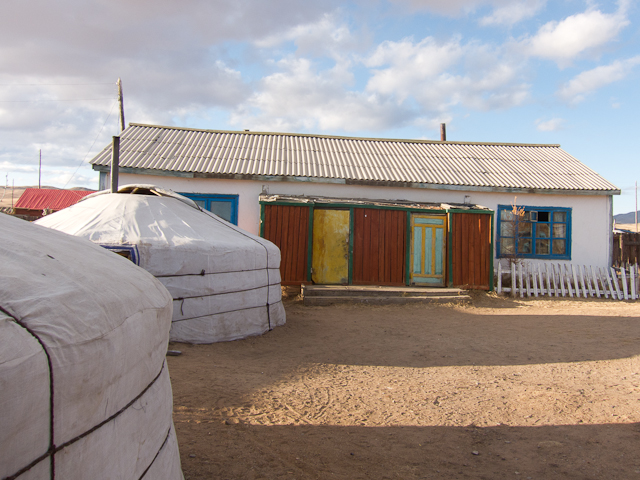 But I’m taken (forever) with the Mongolian ideal on being a ‘human’. The three original Mongolian symbols that signify a human are: relationship – a human MUST relate with other humans, one cannot stand alone; service – a human must serve others, this is not an option but a calling (pure Buddhist Dharma but perhaps in Mongolia long before Buddhism became the predominant philosophy), and; respect – one must do all things with respect for the actions taken.

Why travel alone . . . well, it’s easy to be a tourist in a group or alone but it’s nearly imperative of the ‘traveller’.

3 Responses to Tes to Tseterleg