Given the overnite cold there was no way I was going anywhere anytime soon. So I packed up and waited for warmth while we went to breakfast at the dormitory school. Breakfast was salt tea and day old bread slathered with butter (butter with flavor . . . why don’t we have that in the US ?) and then sugar was poured across the buttered bread with the runoff falling back into a bowl. 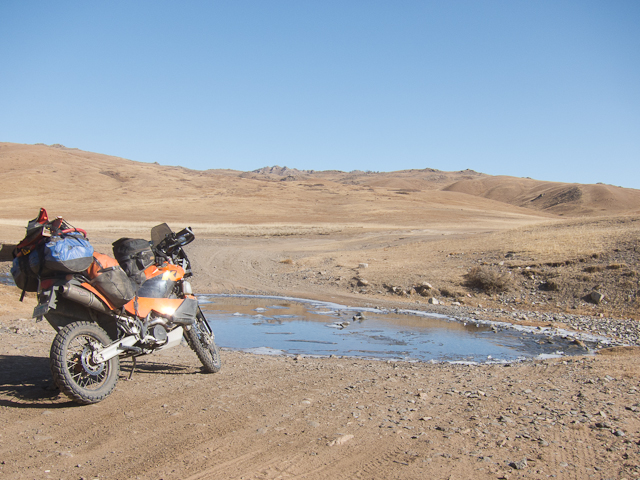 After breakfast, for the second time during this trip, I was reminded of the small-mindedness of my own difficulties. One of the trainer’s parents, her father, had just passed away. The other trainer searched for transportation for her and then went off to finish their work. She packed her bags, weeped, and spoke on the phone with family. When I expressed condolences she stiffened her back, smiled, and said, “Please have a safe trip, and a good one.”

It was very cold on departure, probably no more than 28 degrees with a howling wind. Frankly, I was surprised the Duckling started. And it stayed cold for a long time and then suddenly the wind stopped and it warmed up to at least the lower 40’s.

At one water refilling stop a Mongolian kid asked if he could ride the KTM. And he clearly expected me to say “yes”. When I pointed out that his legs were at least 6″ too short he agreed but was unswayed. Funny. 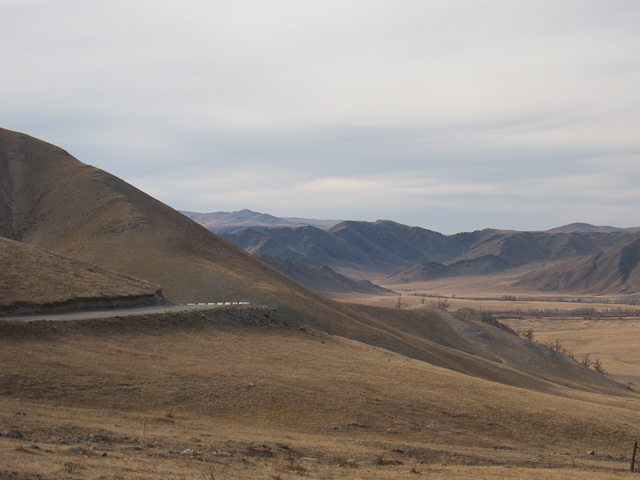 On this day there were long, rocky, relatively gently sloped climbs to passes with Buddhist cairns and prayer flags. At least three times Mongolian families were performing pujas and eating.

As the ride to Morun was not long, just 200km/125miles I made it in about 45 minutes before sunset. The last hour of the ride the bike behaved “normal” and it was almost relaxing to ride for the first time in many, many days. Fatigue was probably a significant cause but I did feel not just relief, but relaxed. Then I snapped to and remained alert. It’s amazing how one can become accustomed to riding at 50kph/30mph over loose baseball-sized rocks in the middle of nowhere . . . it’s exactly this sort of nonchalance that leads to a bad or worse day.

Morun was CRAZY. There was pavement, my first since Ulaangom, 4 days and 350 miles/550km ago. There were buildings of two stories or more ! As I rode through the bike became a little feverish and when I stopped to ask about a hotel it turned out I was immediately in front of the best choice in town. (Not that many choices . . . but more importantly, the best one was not obviously a lodge/hotel/guesthouse.)

Yeah, it's a one room ger but the lot is nice.

The check-in staff led me to a HEATED (!) garage for the bike. My room was . . . incredible after sleeping on ger floors, in beds whose spring mattresses (uncovered) looked like giant cheese graters, and in rooms that were often just above freezing in the morning. Of course, a shower seemed like a good idea and a desirable one. It had been 11 days. But the water was cold. When I called the front desk I was told – “just one hour”.

So I decided to eat dinner and shower afterwards. The menu was hilariously non-Mongolian and terrifically limited. I had a cream of potato soup that was as bland as could be and then some chili chicken that would have made an Ohioan complain about tastelessness. The two local beers helped. 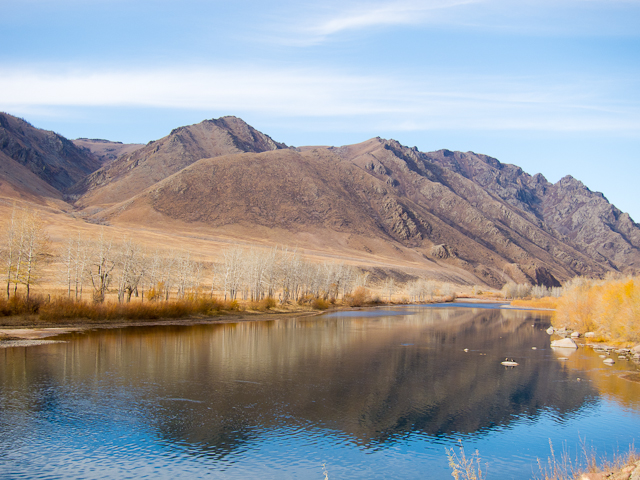 Sometimes Mongolia can be conventionally picturesque.

Upon returning to the room the shower remained not hot, but it had gotten to nearly lukewarm. I hate cold water but washed in any case. And slept like a dead man.