With a bit of last nite’s stew and some fresh salt tea in my belly I departed toward Baruunturuun, my “target” of yesterday . . . this was another trend that would hold until UB . . . no matter how seemingly reasonable or close my goal for the day . . . I’d fail to make it and generally the day would close with relief, not disappointment.

With a topped off radiator and cool temps the bike moved along with it’s boingy back end hitch constantly reminding me to be cautious in terrain that would have been fun but was now inducing frequent sphincter pucker. 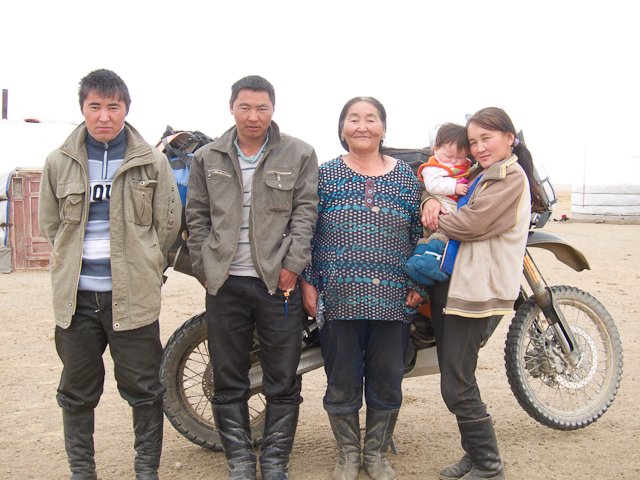 New poppa on the left, Grandma made a mean camel milk
smoothie.

About 30km/20miles from Baruunturuun I needed to search for more water. This sent me off across unmarked steppe toward a ger with a large collection of bactrian camels nearby, one a radiant white.

Once again I encountered easy, gracious greetings, a bit of curiosity toward my orange bike and a natural and apparent inability to notice my own anxiousness regarding the weather, time or the KTM’s condition. Grandma chatted with her family, they chatted with each other, circled the Duckling and finally, after perhaps five or 10 minutes gently beckoned me toward their ger. Salt tea was immediately offered and carefully handed around the hearth (NEVER above it). It was almost creamy. I watched grandma take a huge ladle and lift the heated camel milk high into the air and then pour it back into the cauldron. Eventually, she had her son lift the cauldron to a resting place away from the fire.

And then she looked at me, then the camels milk, with a look of interest about my interest. “Da !” Amazing. If you’ve never had fresh camel’s milk . . . (yes, that was fun to write) – you’ve no idea what you’ve missed. Whatever it’s nutritional value it’s offer to the palate is pure goodness.

This brief (in Mongolian terms) 45-minute stop for a single liter of water was one of the three punctuations of the day’s travels. Clouds moved low and quickly overhead. The weather forecast was supposedly for clear skies and no precipitation but weather seemed imminent and to a motorcyclist, threatening. And yet, this was a precious moment and even quite calming. I took their photo against the Duckling and offered my best “big thanks” in Russian. For all you Discovery Channel fans . . . you’re getting at least .00000001% of the experience. Wow.

At Baruunturuun I fueled up and noticed that the sky was indeed falling . . . As I departed toward Tes and hopefully Bayantes, a horseman rode out toward me, departing from a goat slaughter. I had no idea what he wanted, if anything but did stop the KTM. He had a few words of English and clearly took himself seriously. At first I thought he wanted me to stop, eat, and drink (vodka). But it became clear he wanted to know if I’d been drinking. Then he demanded to see my Passport. He was a short man, heavily muscled and no doubt was the reincarnation of Chingiss Khan but . . . I found him boring and my American sense of irreverence overwhelmed his sense of authority. 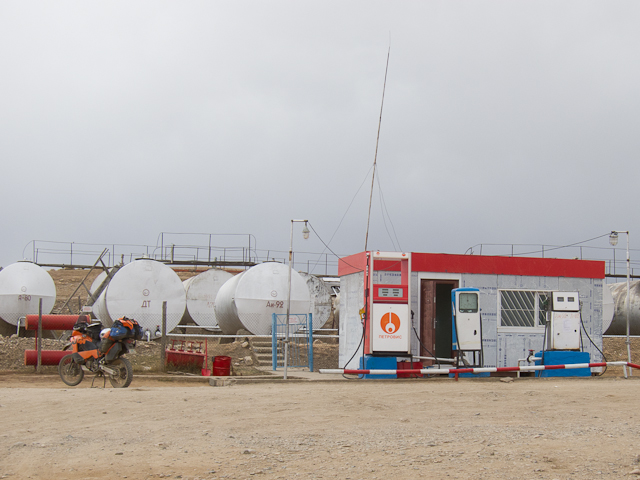 Above ground fuel tanks and a digital display on the pumps, not sure which was weirder in it's context.

In distance neither Tes nor Bayantes were far but the way was not fast. The wind picked up and dust from the dirt flour that comprised the way coated my eyes and sprinkles dotted my windscreen. It was hard to imagine how anyone could walk in mud made of this dirt flour let alone ride a motorbike. In 3 hours I saw four moving vehicles, two of them were farm tractors on . . . a harvested field. Incredible. According to the CIA Factbook less than 1% of Mongolia’s land is arable.

The landscapes were still good but with thick gray clouds, not exactly picturesque. There were two funny sights – both involved Mongolian households on the tops of small hills, one a ger, another a house AND a ger. The households were surrounded by all the respective owner’s toys. Somehow, I doubt these folks were from the countryside. I’ll bet UB carpetbaggers.

A grinding, slow ride thru a valley followed with a grinding slow ride to a 7000’/2300meter plateau. Here the clouds could almost be herded, they were so close. My normal ger inventory was empty – nothing for almost 90 minutes. And then a sudden “clunk” came through the handlebars. I stopped and found the worst – a flat front tire.

There were sprinkles falling on me with the occasional sleet & snowflake making an appearance. Nearby hillsides were obscured by clouds and weather. I was about 15km/10miles from Tes and there was about 2 hours till sundown, though with the cloud cover it would be dark sooner. What to do ?

I could search for a ger by foot . . . if I found one the only problem would be if snow left the bike buried till next Spring. I could try to ride the flat in – if the rocks and goat heads ended that was not unreasonable. My front rim is crazy strong and laced with huge spokes by an excellent wheel builder. And the tire was definitely NOT coming off the rim. I could set camp with my summer bag . . . even with the cloud cover it was clearly going to be a VERY cold nite at 7,000’/2300meters . . . and if sufficient snow fell I’d be somewhat trapped in the morning. I could just fix the flat and ride into Tes. No good choices.

Fifteen seconds of fairly intense anxiety and not a small dollop of simple fear gave way to action. Fix the flat.

When I rolled into Tes it was cold and getting colder by the minute. My intention was to ride in with headlight on in the hopes of securing some attention from a local to help me find a place to sleep. Well, it was so dark I had no option. Two Mongolian men seemingly read my mind and delivered me to a lovely family who spoke exactly one word of English. They gave me a great soup and lots of tea. I parked the KTM as close to their structure as possible to help against the cold. Grandma laughed but sympathetically when I tried to speak hoarsely through a parched throat.

Gray and threatening, with lots of evidence of what the weather will bring.

Once again – for those who are praying for my safety . . . save it for when I return to California’s highways or America’s cities. Send your wishes to someone who needs it. On this trip – there are angels everywhere, Muslims, Atheists, Buddhists.