The Orange Duckling gets a hitch in her get-a-long

The morning in Olgai started fairly well. The stove in my ger made for nice sleeping. The sun was strong and the Orange Duckling spent the nite inside a concrete shed with the cover on. Electricity had been restored for 2 hours about midnite but now was out again so no Internet and no shower. 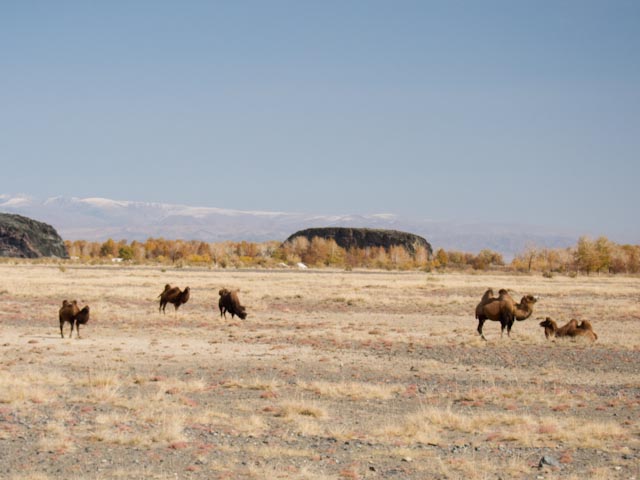 On this day I saw many times more animals than humans . . .

I reviewed my map, checked the bike, and slowly ate my stale bread with pseudo-Nutella and Nescafe. A quick au revoir to the Swiss and some fueling and then out of town in clear, cold air while lots of Mongolian school children waved. I was feeling quite a bit of relief at this point because both I and the bike were in Mongolia, finally. Sure, it was still 1600km/1000 miles to Ulaan Bator but at least the big mountains were behind me. To be honest, even the sense of relief felt premature. (And it would prove to be so . . .) 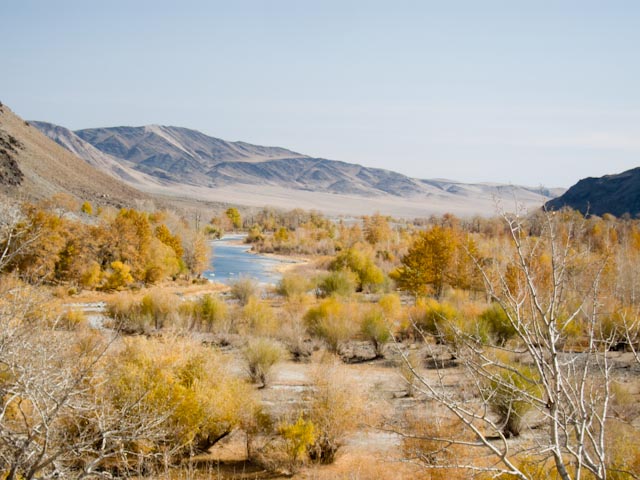 As I climbed the road into the hills my goal was to move east and then meander north toward a large lake and then move to the northeast and Ulaangom. My original plan had been to ride a deliberately rugged path but the rebound in the KTM’s shock had been slowly deteriorating since I exited the Wakhan Valley, 3000km/1800miles ago. The KTM’s handling on smooth roads was largely unaffected. But in the wildly undulating, incredibly mixed terrain of Mongolia (grasslands, boulder fields, goat heads, sand washes, etc) it did require additional attention to ride the bike. For one, the undamped “bouncing” contributed to some nervous steering while I was trying to find a smooth path, additional wear on both tires, and it just wasn’t as much fun. 🙁 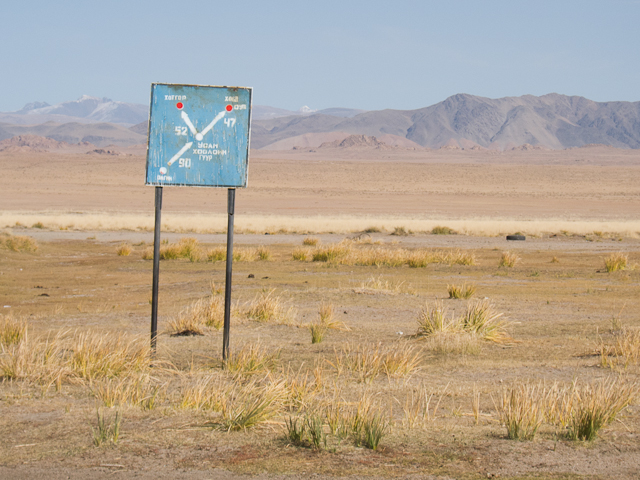 The clearest thing these signs indicate is that a human was here at some point.

The road summarily deteriorated and speeds moved from the high 40’s to the low 20’s and then the teens (MPH). The scenery was inspiring with big snow-covered peaks peering over the hills, valley’s with river’s lined with golden-leaved trees, and picturesque ger settings. But something was different today. The bike was clearly not getting cooled as well as previously or necessary. At one point I stopped along a river to fill my own water bottle several times with water and replenished missing coolant, sacrificing that bottle for my own use for the rest of the trip. Effectively any riding which loaded the engine, especially long, slow technical climbs caused the bike to run less than great and very suddenly, filled me with high levels of anxiety. 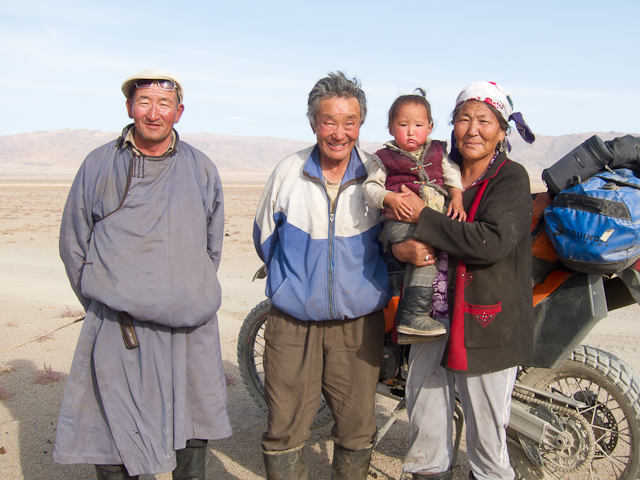 There are no words to describe this encounter but it did kick-off my photographing always willing to help Mongolians.

Consider that seemingly with the really big altitude/weather challenges behind me, I’m now nursing a hot-headed bike across REALLY remote parts of Mongolia. As I rode on the number of water stops and ger sightings continued to decline as the bike’s fever demanded ever more refreshing of it’s coolant reserves. So an ever weakening rear shock’s performance and a compromised cooling system made enjoying the remoteness, the view, and the track’s challenges more difficult to attend and eventually became an enervating trifecta (shock, cooling system, track demands). 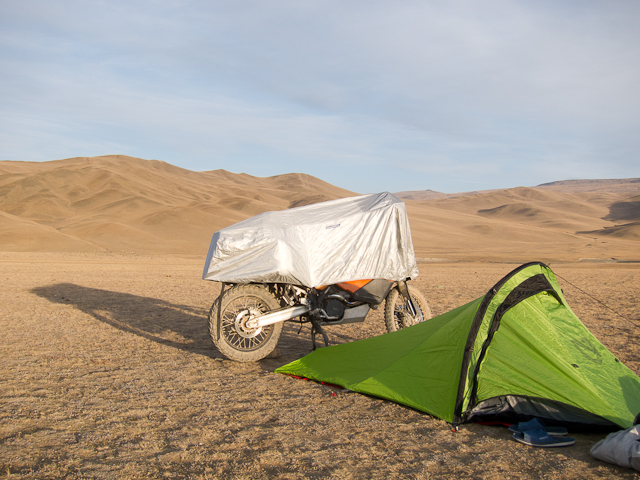 My attention would flash from the track to the coolant temperature to the view (including the whereabouts of a ger that might be either a refuge for the nite or a source of coolant water) and then the GPS as the track often devolved into a paths fanned out in front of me. Consider, just briefly, doing this for 8-10 hours a day for almost a week. I still stopped often to take in views, photograph landscapes but not AS often, especially if there had just been a difficult stretch of climbing at slow speed and the engine manifested feverish performance. 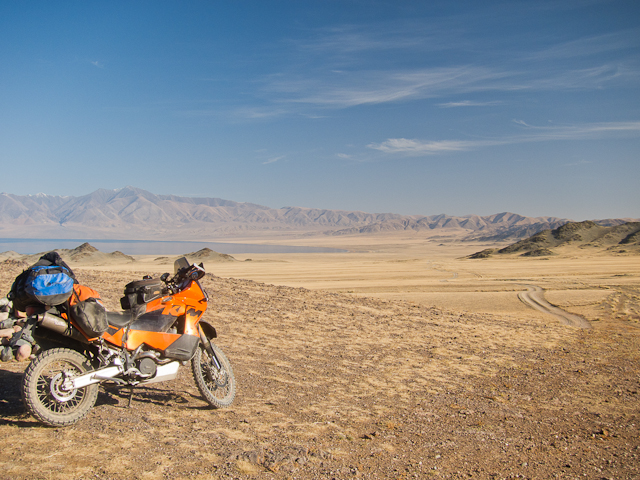 The suddenness of the problem also knocked me off-balance a bit. Season that surprise with the clear evidence of a slow track, very few opportunities for seeking help or refuge from ger ensconced Mongolians and anxiety levels were soon at trip highs. The final amusement was that a brief encounter with a Mongolian man where I sought to confirm both my GPS and map orientations resulted in him urging me to go in a direction which my instincts deemed wrong. But I listened to him and overrode the GPS, my map and my intuition and ended up riding a track which optimized slow speed and technical requirements. 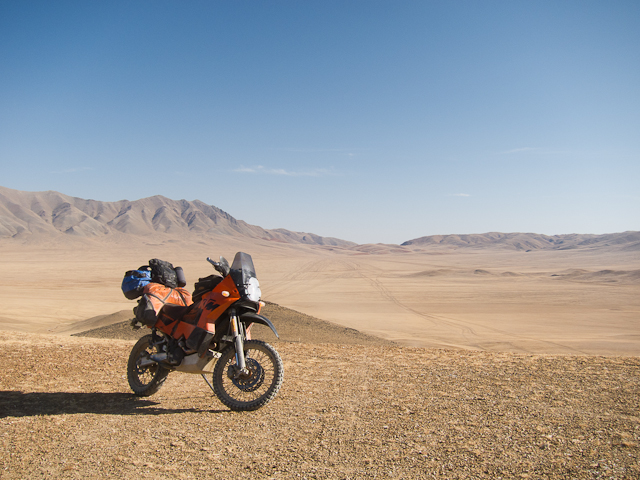 Far from nothing, close to nothing.

At 4PM I was not exactly sure where I was (beyond a precise Lat/Lon), how much further any village might be and began to have great concern for the health of the KTM.k This seemed a fantastic place to leave the bike if I never wanted anyone to see it again. After 6 hours of determined riding I’d ridden just 120km/75 miles. I should have been hungry and my mouth was parched. The stale bread and pseudo-nutella breakfast was a cold mirage. 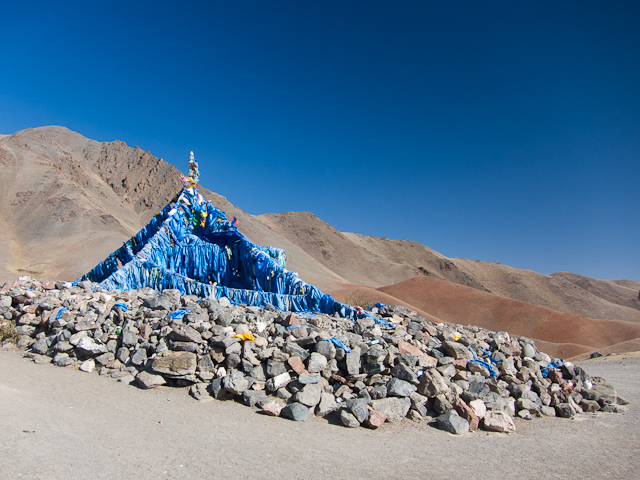 This pass marked the border between the salt-marsh valley and the Altai foothills.

Finally I came upon a settlement with actual houses and . . . a benzine station. When I asked the kid who pumped the fuel if there was a place to sleep in “town” he emphatically indicated “no”. But at least he was able to confirm my position. I had ridden the track originally intended but due to the bike’s shock had decided to forego. The village had several places to buy . . . something but all were closed and no one was interested in opening them or finding someone would be interested.

So without water and a decent container for any even to be filtered, and with one decent meal in the last 40 hours I rode on to a campsite I didn’t know the whereabouts. Of course, the terrain quickly climbed through a baby-head sized boulder field and it seemed that carrying on meant even higher (colder) areas so I stopped and set camp. Sure enough, soon after stopping two Mongolians drove up in a Wazzak and deployed themselves for a chat with the guy on the orange bike who strangely was setting camp on the lower reaches of a high pass. 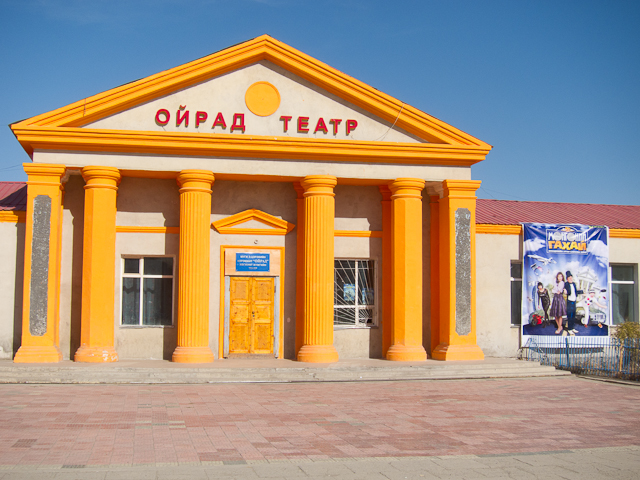 Probably the most beautiful Soviet-era theater of the trip, da ?

Sunlight was falling fast. My gear was not intended for the night surely to come. Without food nor water it would be cold. I tried not to be rude but their english was non-existent and my anxiety easily surpassed my Mongolian vocabulary. I’m sure they did find me a bit un-neighborly and for that I’m still bothered given the amazing patience, hospitality, generosity, assistance and warmth the Mongolians I met outside of Ulaan Bator showered me with. 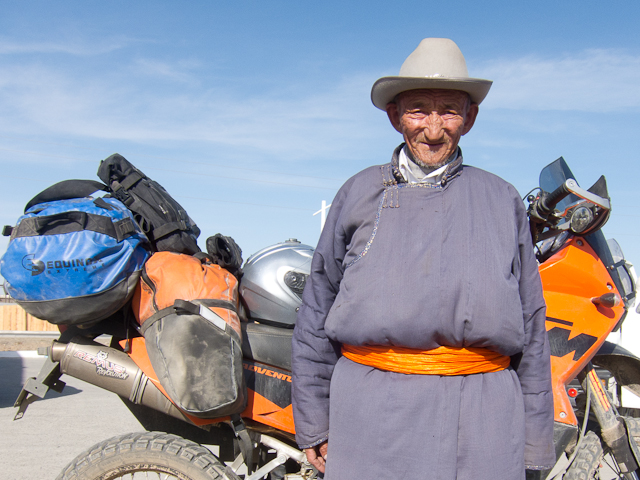 Once inside my tent I stewed on how to get the bike “onward” and what might be causing the cooling problems. (No water in the crank – oil is still shiny black and relatively clean after more than 16,000km/10,000miles. No obvious leaks in the coolant hoses. No belching into the coolant reservoir.) And I waited for it to get cold. It did get cold. That was the coldest night I’ve even spent camping. By morning I was full fetal deep in side the sleeping bag.