It was a Mongolian movie, my part was just to provide an opportunity to demonstrate their helpfulness 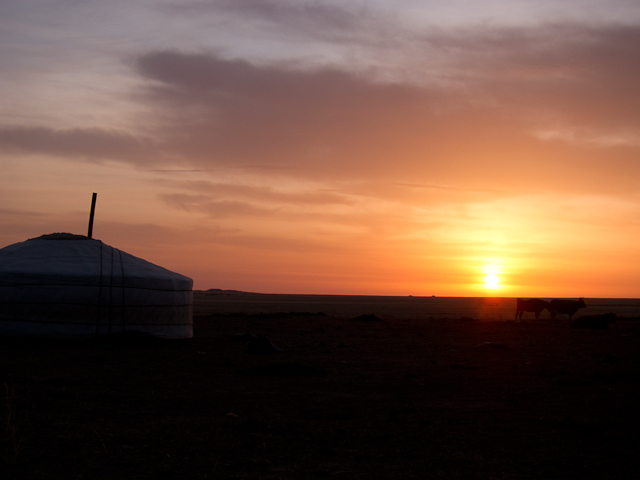 Not warmth but not weather !

Morning came and . . . I hadn’t frozen ! 🙂 I was even moderately excited about the day, not anxious. The clouds from the evening had given to a cold, clear sky overnite but the morning sun, which did not hit the tent until after 8AM, was muted by cirrus wisps.

So now we set about the normal part of recent mornings in a pattern that would persist until I changed the oil in Ulaan Bator. Wake up but not get up. Dress in-place to maintain warmth. Have a survey of the bike – chain, fairing bolts, tire pressure, radiator coolant level and radiator cap check (for ice), etc. If possible orient the cover or bike or both to gain maximum benefit of the sun’s warmth for the battery. Start to pack up . . . prepare for departure.

Overnite it had been absolutely silent. In the early evening, just after sunset a few motorbikes had passed and at least one four-wheel vehicle but it seemed that none of them had seen me. The track being what it was and the cold the motorbike riders negotiated certainly didn’t encourage gazing about. There were a few times that dried grass hit the canopy but . . . impossibly silent. No wind. No birds, until morning. Silent.

It was clear that I needed to go over the pass one can see in the image of my campsite. I was worried about overheating but enjoying the fact that the morning’s cold and the dull sunlight would keep ambient air temps low. Good for the bike, less good for me but speeds were not going to lend much of a wind chill factor to my discomfort.

And pleasantly surprising we rode up a steep, off-camber track and found a large cairn at the saddle. On this day I started shutting the engine off and gliding whenever possible. In my final 1500km I’ll bet I glid more than 30km. A Mongolia family came up the track behind me in a huge SUV and stopped to make what seemed a puja at the cairn. I was amazed at the speed with which he drove. It had to be hard on his vehicle but the passengers must have felt they were trapped in a paint shaker.

Several small water crossings were mildly tricky due to the ice and the frozen mud. But the scenery was lovely. Golden yellow grass, contoured hills, huge lakes, black mountains and finally, snow covered Altai in the background with the sky. 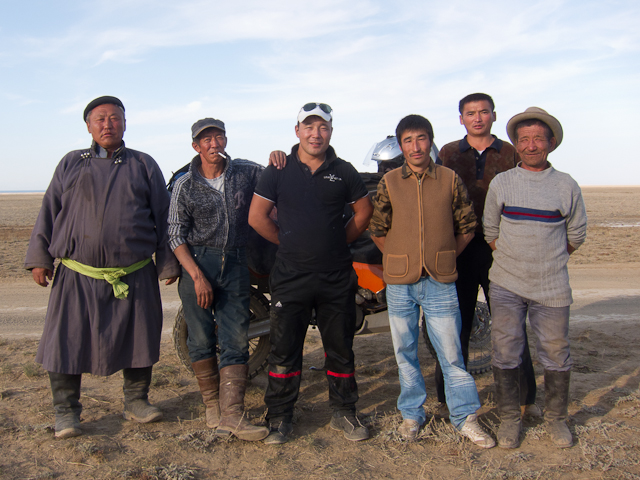 On this day I could take in and appreciate the wonder of growing up in a place where there are no fences. “Land of the Endless Blue Sky”. Tracks crossed and fanned out. And then, often, funneled back in. Between two spots you often observed the longitude lines on a globe rendered in grass/sand/rock/clay. A mongolian did “follow the proximate path”. He simply set his bearing to the object of interest and, geography excepted, made directly for it. How many places EVER had people who looked at the world like that ? And how long ago was it that europeans had a similar, unconstrained view of “the way” ? When you witness Ulaan Bator traffic, even pedestrian traffic, you understand a bit more why it behaves the way it does.

As was, “is”, and would become the pattern over the last 2 weeks of the trip, yesterday’s anxiety washed away due to the picturesque scenery and the unflappable and patient Mongolians encountered. Yes, I stopped a bit less. But when I stopped I stopped longer. There was no way I was going to “rush” to UB just because my bike was a bit rocking horse with a fever, now. The scenery was still fantastic and fantastically varied. The riding was a dream for an “adventure bike” rider – challenging and endless and fun. The bond with Duckling is certainly stronger but even the Valentino Rossi animist in me knew that whether I arrived in UB in two days or 10 it would make no difference to the health of the bike . . . and realistically, I could only go as fast as “being the path” would allow. Sometimes I caught myself laughing out loud at my predicament and my stubborn refusal to ride like Paul Revere. But no one cared if the British were coming, or in this case, an Orange Duckling. We would get there in good measure, as we could and did. 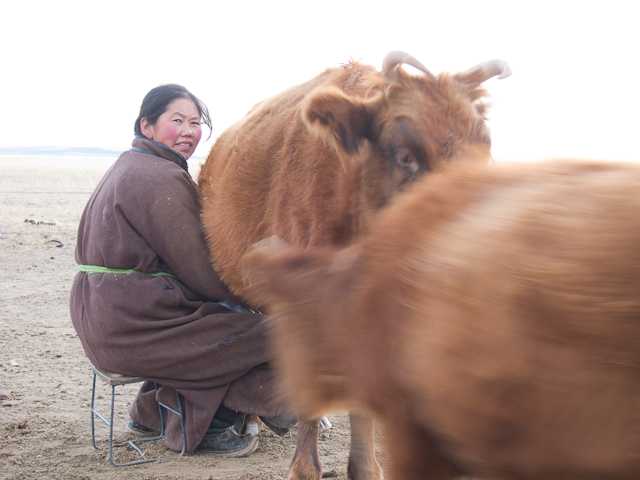 I have little doubt that it was warmer on the stool next to that cow than in the ger.

At a significant pass there were a number of signs in Mongolian, an enormous rock cairn, and a Mongolian who circumambulated the cairn after parking his front-end loader. He asked me, in Russian, where I was from, where I’d come from and where I was going. His face seemed to indicate some concern for me. It had been 5 days since my last shower and the previous nite had been short of rest, food and water. He offered me a drink of water from a new 1 liter water bottle then insisted I take the whole thing.

The ride down from the pass was a plunge into a large salt-marsh plateau. Pine trees appeared on east facing slopes. Many mongolian horses grazed. Suddenly the only folds in the landscape were distant, but large and inundated in year-round snow. And then amazingly, pavement, in pretty good shape, appeared. This lasted for 30km all the way into Ulaangom, where I changed money and had lunch at the Chingiss Khan steak house – where there was no steak on the menu. A warm sun in a cloudless sky baked me at just 3000’/900meters. Dehydrated and drained it felt wonderful. Lunch was a bland local soup with an egg and lots of sheep meat. Some sort of cheese/rice/egg dish went along way to at least addressing the calorie deficit. Three mugs of tea later I still felt like a raisin. 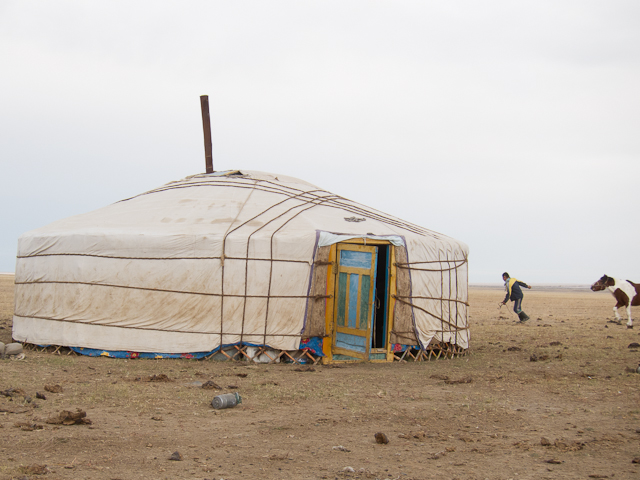 My home for a nite.

On the way out of town I fueled up and met an old local who was dressed traditionally but his orange sash was irresistible. Even the young men encouraged him to be photographed alongside my bike. But his initial disinterest collapsed to outright bravado. In one shot his left arm rests jauntily on the handlebars as though he were the new owner. His sidecar was fantastic.

When the tarmac ended there was a bridge in some state of mis/dis-repair. But a wide, though shallow water crossing proved no problem. In spite of the plateau I traversed, the track dove in and out of the plain like a giant snake had wrested the soil but not actually tunneled. From a distance it looked “fast”. On top of it, it twisted, dove, barrel-rolled ahead, sometimes yielding 50kph/30mph, sometimes barely 10kph/6mph. The warm sun and the irregular speeds caused the cooling system to strain and soon I was looking for water.

So what do you do when the nearest supply of water is 10-30 minutes away and is of VERY high salt content (not great for a cooling system’s resistance to corrosion) and the small quantity you can carry has been exhausted. (To be honest, adding a liter of water on a modern motorbike is ALOT of added water. 200ml would be commentable. 1 liter is irrefutable evidence of a significant problem.

Finally in the distance I saw a vehicle pulled over and stopped alongside it. The mongolian men had no English skills but still asked, in Russian, all the normal questions. My own inquiries about water were met with ‘nyet’. Well, there’s water and then there’s water. And my options were all dried up. So I held the empty water bottle the front-end loader driver had given me earlier in the day to my crotch and said the Mongolian word for water.

Amazing. Suddenly all 6 men had to relieve themselves simultaneously. A few minutes later I had over a liter of pure Mongolian Gobi Coolant aka MGC. I don’t know what I would have done, or they could have done, if all 6 males had been females. 🙂

Another pattern now began to emerge and that was that once the engine had gotten “warm” and the ambient air temperature had risen the bike tended to protest more forcefully and more often. 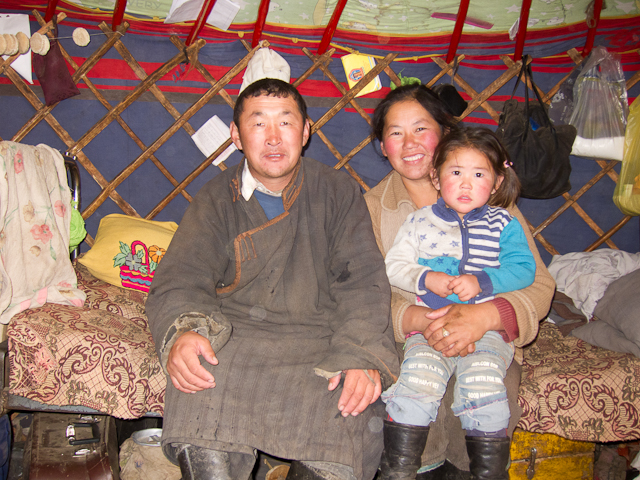 At 30 minutes to sunset I was still marveling at the scenery but having to stop the bike every 20 minutes or so. The MGC was nearly depleted and my location was still very much salt-marsh, but VERY far from any water supply. I saw a ger in the distance and made straight for it. Here a Mongolian family had water but after giving me fresh water looked at the sky, spoke amongst themselves and “encouraged” me to stay for food and sleep. I never even thought about declining.

The mother just radiated warmth and strength. Her husband was from the original cast of “men of few words”. They had an older son who felt like he was half wild man and a lovely little daughter. She made a stew of a few potatoes and 3 kinds of dried meat and a few noodles. I was amazed when the produced a mobile phone that offered an English speaker who wanted to make sure that I would not be offended or upset with the menu. (People who really cannot even grow vegetables are aware that there are people who ONLY eat vegetables.)

The highlight of the meal, especially according to Mongolian friends, was when she took five dried meats and cooked them and then the bowl was handed about according to standing in the household and age for the holder to knife off the meat(s) of his choice and eat until satisfied. In the end, mom ate more meat than any of the men.

They showed me a bit of TV, using a car battery to power a satellite receiver. One of the shows was a crazy serial about a uber-wealthy Mongolian family that was as dysfunctional as rich.

I slept on a mattress-like pad on the ground with the whole family except for mom and daughter who slept on a bedframe.

In the morning, the rose early and began chores including milking the cows and herding the goats and sheep. Mom made some more of the salt tea from last nite (a common beverage in these parts and throughout Kazakhstan, high Nepal, essentially comprised of cow or yak milk and rancid yak butter). It’s much better than it sounds and those who are raised on it are ALWAYS excited to drink it.

My attempts to leave them money were met with a mystified laughter. And a very firm refusal. After photographing the family they escorted me to the KTM and off we went.

One Response to It was a Mongolian movie, my part was just to provide an opportunity to demonstrate their helpfulness