The guesthouse in Kosh Agach was nearly full, mostly with Russians, two groups of which I met looking for . . . a guesthouse.

The first and largest group were installing a fiber optic link in this small village near the Mongolian border which rests on a salt marsh at 6500’/2000 meters. Finished with their project and eager to return home . . . they set about cooking and drinking – wine, beer and vodka. I shared some toasts and some food (dumplings) but managed to escape alcohol poisoning. 🙂 It should surprise no one that the bulk of their caloric intake seemed to be liquid.

The other group was a pair doing seismic studies for the Chinese government who are eager to build a natural gas pipeline from Russia to China across Mongolia. They had a few more days in Koch Agach but showed strong support of their Russian counterparts in celebrating the end of THEIR project.

In the morning they posed with me and the KTM as I waited for the sun to warm the battery so I could leave for Mongolia. At 10AM they were all sipping beer in the cold. Several of the Russians tried to give me warm clothing or food before I departed. Great people. 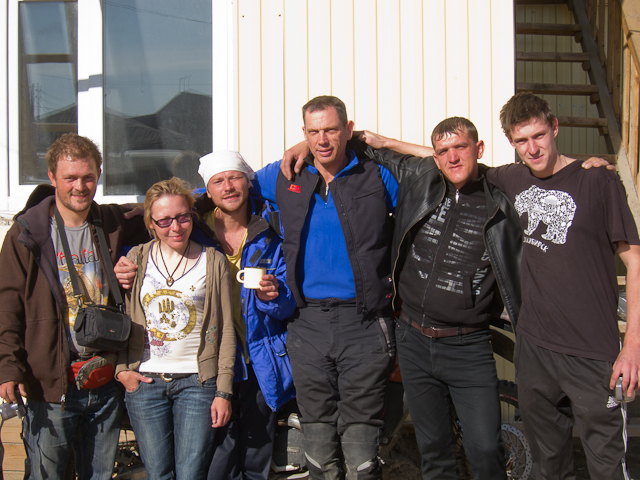 It's a sad thing that two big countries wasted so much time avoiding being the great friends their people would easily be.

This time I met actual humans at Russian border control and had my paperwork processed for me fairly quickly. For whatever reason the Russian Customs official decided to be difficult with the paperwork for the KTM. Her grasp of english seemed strong but she used words inconsistently and NEVER matching those on the English-language Customs form. I found it a bit wearying. Eventually I was sent off to Mongolian border control, a further 24km/15miles away.

Here I was scammed into be sprayed with disinfectant by a Mongolian who charged me 50 Roubles ($1.75) for the privilege. He asked me if I wanted to change money. The rate he offered was hilariously low and when I countered with a better rate he protested loudly. Then agreed. 🙂 I don’t ilke transactions with such people and told him I was no longer interested in changing money. He told me that Mongolian Border Control had just closed for 90 minutes for lunch.

I sat in the warm sun and cold air for nearly 2 hours. Once I was allowed to enter the facility I was stunned by the English language signs directing me to Customs/Immigration, etc. There were NO signs providing such information in any language since . . . Turkey, 12,000km/8,000 miles ago.

Mongolian Immigration went quickly but Customs became sticky when I was told that I must exit Mongolia WITH the KTM. I suggested it was late in the year, cold, that I’d corresponded with a number of people including Mongolian government officials about this matter beforehand and would “do what I could do”. This honesty delayed my departure a further hour as was marched around the facility in front of several officials, none of whom spoke to me but simply listened to another official’s version.

When I finally departed it was nearly 3PM, windy and getting colder. The road quickly disintegrated into huge waffle board vibrating the bike harshly and reducing speed to 10kph/6mph. Scenery was rolling high desert with ample evidence of a fairly recent and heavy snowfall. (I would learn that a meter/3′ of snow had fallen in mid-September.) At Tsaanaguur I had a choice about riding toward Ulaangom or Olgai. Olgai was just another 100km/60miles and it was already late in the day. Ulaangom was nearly 200km/125miles and I had no expectations about an autobahn experience in the near term.

My GPS indicated a way that diverged significantly with the “evidence on the ground”. So be it, I followed land contours and often found my self on an off-camber hillside but moving generally in the direction of Olgai. Large mountains peeked and then demanded attention as I neared the second of two 8500’/1800meter passes.

Mongolia is difficult to sum up in a few words. The commonalities one experiences are gers (the Mongolian yurt), horses, goats, and a huge variety of landscapes, all quite picturesque including grass lands, salt marshes, alpine valleys, high desert and huge lakes.

When Olgai finally came into view I was shocked. It had sprawled crazily since last visiting 5 years ago. The backdrop was spectacular and a number of Mongolians waved at me to join them for tea and snacks. It wasn’t so late but I was tired and eager to find a place to hide the bike from the cold overnite. 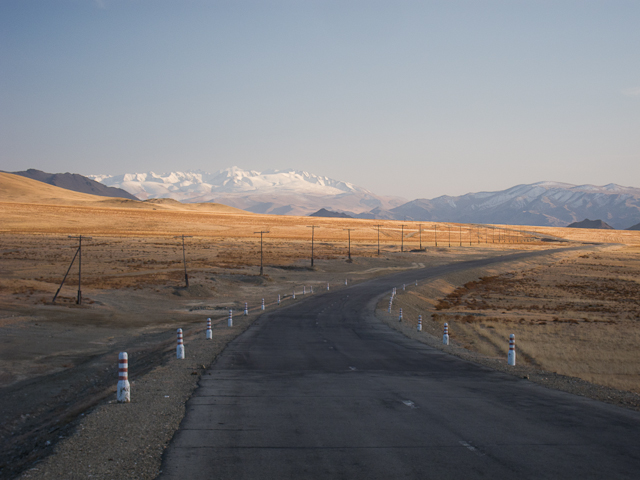 The local eagle festival had just ended and the last remnants of tourists were myself and a Swiss couple on an 80’s BMW boxer (road) bike. After the three of us left they would close the resort for the season. The Swiss had come from Ulaan Bator and were planning on riding to Novosibirsk (the capital of Siberia), far to the north and considerably to the west. I suggested that the cold I’d just negotiated would soon be mixed with snow, given both the cloud cover and forecasts. He, Michael, seemed undaunted. Europeans will just take more chances than Americans, generally. I don’t know why. (Eg, if one examines the American Alpine Institute’s statistics on climbing and then a counterpart for Chamonix or the Swiss Alps you’re immediately struck by two things. The Americans put MANY times the number of people on their similarly sized mountains and have a small fraction the number of fatalities of the continentals.)

Unfortunately the Russians had cut electrical power to Olgai and my chance until Ulaan Bator for internet access ended. So did an interruption in my “no shower” streak which would stretch 11 days to Ulaan Bator. 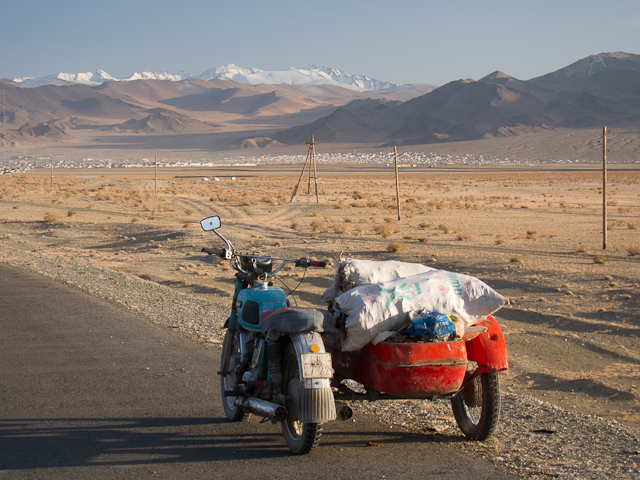 LOTS of these in the coming days, some homemade, some proper copies of 30's BMWs.

I was shown a menu of food and then told that nothing was available but that they could cook me some cutlets and potatoes. In the morning breakfast was stale bread and pseudo-Nutella and local jam (all sugar and coloring and perhaps fruit in the neighborhood when it was made.) I ate nearly the entire basket of bread and would think longingly back at that “meal” in another 18 hours.